Araya Says He Will Win ” Comfortably ” On Feb 2

According to the estimates of the Partido Liberacion Nacional (PLN), more than 25.000 people took part in the “Domingo familiar liberacionista” (Family Sunday) street party, costing more than ¢20 million colones.

With an air of triumph, the PLN candidate, Johnny Araya, walked Paseo Colón among PLN followers assuring them a win on February 2, and a “comfortable” win at that.

In more than two hours of sharing with supporters, accompanied by his wife, Sandra León, said his candidacy is synonymous with democracy and freedom and called for Costa Ricans to get out and vote and do not choose extremists, alluding to its closest rival, José María Villalta, of the Frente Amplio and Otto Guevara of the Movimiento Libertario.

Meanwhile, using Heredia’s Central Park as a backdrop, Partido Acción Ciudadana (PAC), Luis Guillermo Solís, called on supporters to not let up in the last week of the election campaign.

Solís then took to the streets of Heredia for a walk with supporters to the Universidad Nacional. Accompaying Solís was his wife, Mercedes Agüero, their five children and the founder of the PAC, Albero Cañas, former PAC presidential candidate, Otton Solís (no relation) and former PAC legislator Epsy Campbell.

Frente Amplio candidate, José María Villalta, toured the southern zone starting in Perez Zeledón on Saturday, where he promised to keep the area in his priorities and rid corruption in the country. 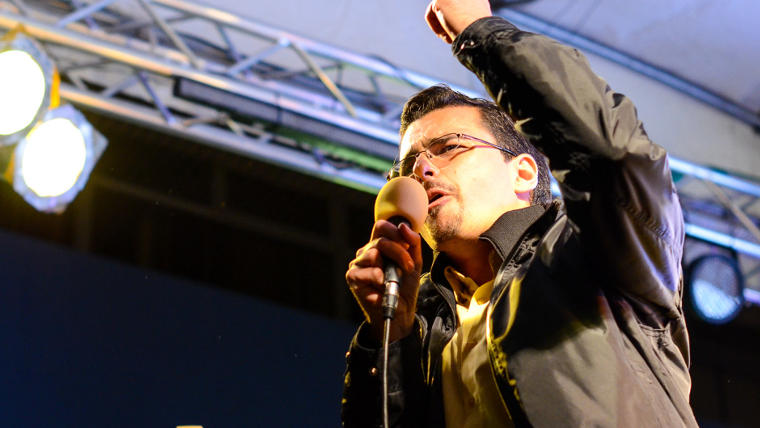 Villalta did not hesitate to make a call to all undecided voters to choose the Frente Amplio for the future of Costa Rica, and support him in his plan for government.

Over at the Guevara campaign, the weekend was a politically quiet one.