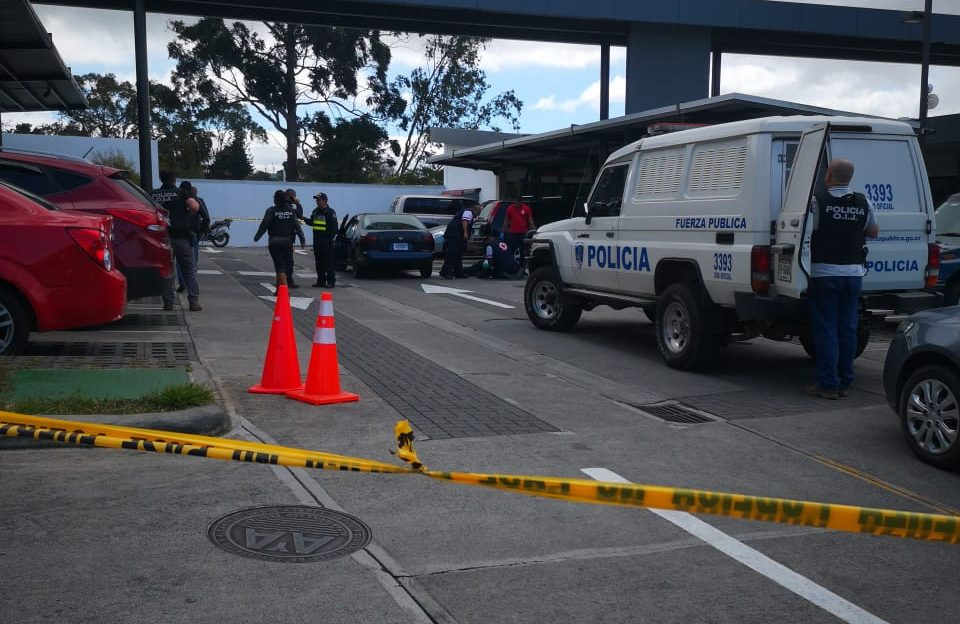 It was before noon on Thursday when three men attempted to assault a client of the BAC San Jose branch located in Paseo Nuevo, in Vasquez de Coronado, on the east side of San Jose.

Two of the assailants died at the scene, shot by the bank security guard, the third assailant died in hospital minutes after his arrival at the medical center.

Original report: Noon Assault On Bank Client in Coronado: 2 Dead and 2 In Hospital

The bank guard and the intended victim of the assault were injured in the shootout. They are recovering in the Hospital Calderon Guardia.

According to the Ministry of Public Security (MSP), the suspects arrived on a motorcycle and wearing bulletproof vests. One of them wore a uniform with the logo of the Correos de Costa Rica (Costa Rican Post Office).

Authorities say the intended victim was carrying ¢30 million colones, which he was going to deposit at the branch.

Apparently, the bank guard noticed a suspicious attitude of the three men outside the bank entrance and got into a shootout with them.

Kenneth Lopez, spokesperson for Correos, ruled out the assailant wearing the uniform was an employee of the post office. Lopez said he did check of the postmen in charge of the area and “all was well”.

In addition, the license plate of the motorcycle used in the frustrated assault is not registered with the Correos.

For its part, the BAC San Jose issued a statement to the press in which it explained that the client (intended victim) was about to enter the branch when he was confronted by the assailants.

“Immediately, the security forces intervened. This generated a confrontation with the criminals,” the bank said in the statement.

José Sánchez, who was withdrawing money from the bank’s ATM told said he saw that one of the assailants was running towards the branch with a gun in his hand and took cover.

He told La Nacion, “I saw when he took out the gun (…). I looked for cover, I went running to my car that was inside the parking lot of the mall and there I stayed. The branch was not full of people, but there were people.”

He added that he heard six or seven shots fired while he was inside his car.

The last bank robbery occurred last October when assailants entered the San Francisco de Dos Ríos branch of the Banco Popular. The assailants arrived at the branch after 8 am, tied up staff, including the two guards and took their cell phones.

According to information by police, in that robbery, the thieves took 12 minutes. The silent alarm was triggered, but they were gone by the time police arrived. No details were given on what and how much they took from the bank.

In March, four men took advantage of a distracted guard of the Banco Nacional in Moravia. In five minutes, two of the men took off with a bag of money and abandoned their motorcycles less than a kilometer away.

In both cases, no one was injured.

- Advertisement -
Paying the bills
Previous articleNoon Assault On Bank Client in Coronado: 2 Dead and 2 In Hospital
Next article570 Drivers Walking For Not Having Paid The Marchamo

QCOSTARICA - A 5.1 magnitude earthquake was recorded at...
Health