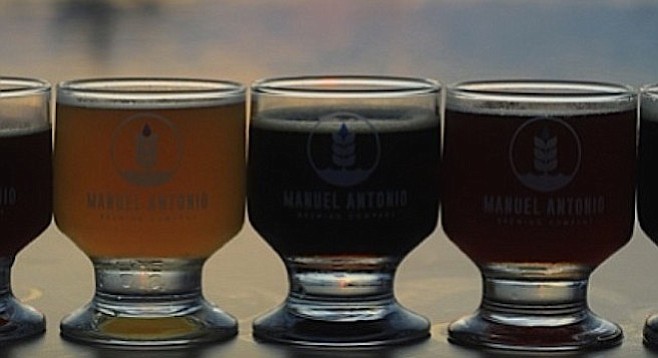 Q24N –  When Jesse Pine and his wife Agi moved from San Diego to Costa Rica three years ago, they found a craft-beer scene in its infancy. “It was kind of a struggle, because you could really just find mass-produced lagers,” Pine says.

So, with the help of friend Mat Robar they founded the Manuel Antonio Brewing Company in 2014, naming it for the small beach town and nature reserve the Pines called home.

“Getting access to equipment was very hard,” Pine recalls. “You kind of had to make to with what you had, cut some corners here and there to make things work.”

In fact, when Robar moved to Manuel Antonio for three months to start brewing, he packed brew-system parts and live yeast cultures in his suitcase. “It was a pretty makeshift setup,” he admits, describing brew days held in a tropical patio setting during the Central American rainy season.

Pine and Robar leapfrogged many of these issues when they brought the beer company back to San Diego and rebranded it Pure Project Brewing. Pure Project has taken one of the inaugural Miramar spaces established by Brewery Igniter — the HG Fenton concept that builds turnkey brewhouses for lease. Rather than having to repurpose parts or wait months for a brewing system to arrive, Pure Project will start with a semi-automated seven-barrel brewing system by Premiere Stainless.

While the opportunity of a ready-to-brew space in craft-beer central enticed them back to San Diego, Pine and Robar say what actually drove them out of Costa Rica wasn’t a lack of interest, it was environmental concern.

“The coast really lacks infrastructure,” Pine says of establishing a business in Costa Rica. Their biggest issue, in a place where septic tanks are luxury items? “How to deal with wastewater.”

“We couldn’t produce beer at the volume we wanted without creating an environmental impact,” adds Robar. So the business stalled.

Their decision to move it to Miramar dovetailed with the arrival of Winslow Sawyer, who spent the past four years making beer for the Boulder Creek Brewery, a Santa Cruz brewpub that burned down this spring. “Okay, I guess I’m going to San Diego,” he thought, “There’s a hundred breweries down there, I can find somewhere to work.”

Sawyer will take the brewing lead, incorporating some of his own ideas and recipes with those developed by Pine and Robar, many of which draw inspiration from the tropical fruits, hibiscus, and other ingredients they found in Costa Rica.

While the name carries over from Costa Rica’s famous pura vida lifestyle, the three men insist using the word Pure is not mere lip service. They promise no use of extracts or chemical additives, and to source only fresh, even sustainable ingredients.

“It’s really about not compromising on the ethics of the company or the quality of the beer,” says Robar. “So if growth means compromising — and we realize at some point it might — then we’re okay with a slower growth rate to maintain the quality.”

Pure Project expects to open late this year or early 2016.

Q24N (La Habana) Cuba turned the page on the governments of...
Read more

QCOSTARICA - Former Miss Universe 2014 Paulina Vega Dieppa has been in Costa Rica since March 30. The 28-year-old Colombian has not left the country...
Health

QCOSTARICA - The Camara de Comercio (Chamber of Commerce) called on its members not to loosen the protocols against covid-19, after the warning from...
National

QCOSTARICA - The bridge located on the Ruta 27 in the area of the Forum de Santa Ana continues to represent a danger to...
National

QCOSTARICA - It is totally false that the Government has changed the sanitary measures, as claimed by disinformation messages circulating on social networks and...
Health

QCOSTARICA - The San Vicente de Paúl Hospital in Heredia, enabled a vaccination program in the mobile unit installed outside of the medical center...
Nicaragua

TODAY NICARAGUA – The Nicaraguan Legislative Assembly, controlled by the ruling party, is preparing to renew the electoral tribunal, amid requests from civil society...
Health

QCOSTARICA - This Monday, April 29, 2021, Costa Rica began vaccinations with the Astra Zeneca vaccine with the Minister of Health, Daniel Salas, being...
National

QCOSTARICA - The heavy rains have not let up in the Caribbean. Although in some areas a few rays of sun came out this...
Economic Recovery

QCOSTARICA - Local tourism at Semana Santa gave a brief respite to the tourism sector, especially in beach destinations: the Costa Rican Chamber of...