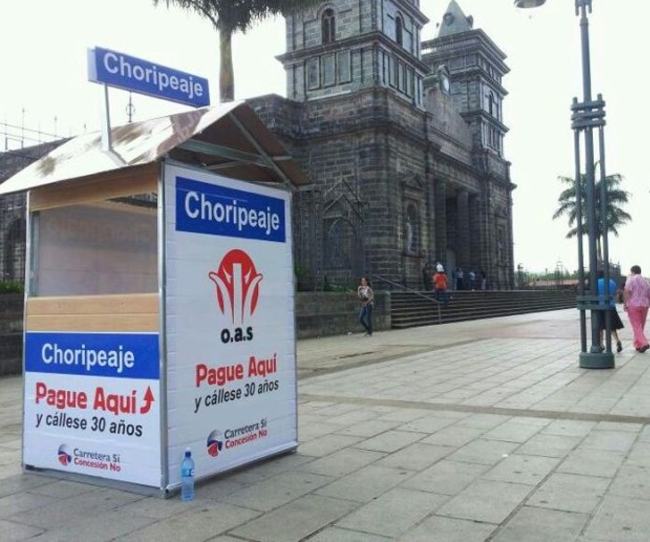 Residents of San Ramón and Palmares found a peculiar structure in the middle of the their parks today, a mock toll booth named “Choripeajaes”, best translated into English corrupt toll booths.

The idea of the group is to bring attention to the tolls planned for the concession of the San José – San Ramón road, whose contract was awarded to the Brazilian company OAS and had generated tremendous controversy in the country.

The group responsible is the Foro de Occidente said the campaign is to drive home the message, “pay here and shut up for the next 30 years”.

Randall Vega, representing the group, said this is to “diversify the public demonstrations and to give the community information relaed to the fight against the concession”.

The “Choripeages” will appear in other communities in the coming weeks,  according to the Foro.

“The idea is that every weekend there will be activities to reinforce the movement we have undertaken”, said Vega.

- Advertisement -
Paying the bills
Previous articleAl Gore In Costa Rica To Give Talk To International Students
Next articleArias Says He Will Not Meet, Hasn’t Spoken or Will Be Speaking To Araya