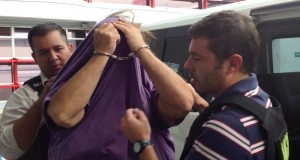 The deportation of Owen followed Migración’s cancellation of his tourist visa, profiling him as “high risk”.

Immigration director Kathya Rodríguez, said that Owen did not have a residency visa and confirmed his deportation in the early hours of Friday morning, leaving on a commercial flight from the Juan Santamaría (San José) international airport.

In Costa Rica, Owen faces charges of illegal possession of a firearm. Rodríguez said that the Fiscalia will not require Owen’s presence to continue with the case, allowing immigration to send him back to the United States.