Q COSTA RICA – The wave of violence and criminality that plagues the country has caused the Ministry of Public Security (Ministerio de Seguridad Pública – MSP) to accelerate the selection and training process of new recruits for the national police force, the Fuerza Publica.

The measure, that will see police officials patrolling the streets with only two months of training, will quickly increase police presence in troubled areas.

Gustavo Mata, the Minister of Security made the announcement on Monday during a press conference in which he dealt with issues related to drug trafficking and the hiring of officers.

Previously, a police cadet underwent nine months of continuous basic police training, learning weapons management, strategies and personal defense, etc, prior to field work.  That police training course was in addition to the four month recruitment process that included psychological and medical tests and background checks, that will now be done in one month. 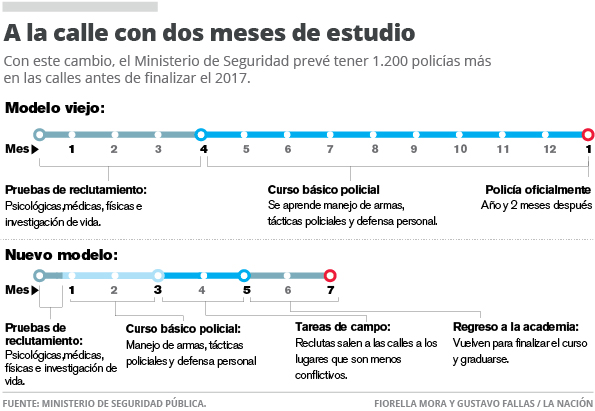 Under the new program, the new recruits will be in the field two months after starting the course,  even if he/she has not graduated, posted in less conflictive areas; then return to the classroom for two more months before being back on the streets.

Mata said 1,200 officers would graduate from the police academy by the end of 2017, adding that ¢25 billion colones (roughly US$45 million) would be spent on the new program that will eventually train a total of 1,500 recruits.

“It is not that a police cadet must be there (in the basic course) a year to be the street; No, sir, we do not have time, the country needs to see the hiring (new police officers) in the street, we give them basic training and then finish training. Costa Rica needs the police officials in the streets,” said Mata.

In order to reach the goal, the minister said the intention is to graduate some 300 new police officials every trimester.

Although the shortened recruitment process allows the government to increase the presence of seasoned officers in more conflictive areas and areas affected by organized crime, the fast-track selection process could open the police force to ineptitude, corruption and police abuse of citizens. The lack of a thorough vetting process of new recruits could have a negative impact on the police force in the long term.

The murder rate in Costa Rica has more than doubled over the past 15 years, 2016 being a record year for homicides.

In January, 1,528 application were received. However, only one-third passed the psychological tests and can continue with the process.

Applications can be at the Fuerza Publica website, www.seguridadpublica.go.cr, in the  ‘reclutamiento (recruitment) section.

QCOSTARICA - The increase in covid-19 cases forces the Ministry of...
Read more