Costa Rica Tops In Press Freedom In The Americas

According to the annual report by the the Non-Governmental Organization (NGO), Reporters Without Borders on the state of freedom of the press around the world, Press Freedom Index 2013, Costa Rica is the highest rated country in Latin America.

Costa Rica ranks 18th of 179 countries in terms of fundamental right and freedom of the press, on spot higher than last year.

In Latin America, the closest to Costa Rica is Uruguay placing 27th, and El Salvador at 38th. The worst countries in Latin America in terms of press freedom are Cuba, placing 171, Mexico at 153 and Honduras at 127.

Among the criteria that Reporters Without Borders bears in mind when developing the classification includes violence against practitioners of information or legislative initiatives undertaken by governments to promote freedom to inform and be informed.

“The Press Freedom Index published by Reporters Without Borders does not take direct account of the kind of political system but it is clear that democracies provide better protection for the freedom to produce and circulate accurate news and information than countries where human rights are flouted,” Reporters Without Borders secretary-general Christophe Deloire said. “In dictatorships, news providers and their families are exposed to ruthless reprisals, while in democracies news providers have to cope with the media’s economic crises and conflicts of interest. While their situation is not always comparable, we should pay tribute to all those who resist pressure whether it is aggressively focused or diffuse.” 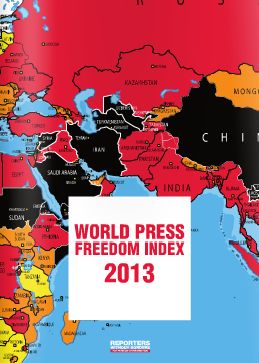 Overall the report indicates that after the “Arab springs” and other protest movements that prompted many rises and falls in last year’s index, the 2013 Reporters Without Borders World Press Freedom Index marks a return to a more usual configuration. The ranking of most countries is no longer attributable to dramatic political developments. This year’s index is a better reflection of the attitudes and intentions of governments towards media freedom in the medium or long term.

The same three European countries that headed the index last year hold the top three positions again this year. For the third year running, Finland has distinguished itself as the country that most respects media freedom. It is followed by the Netherlands and Norway. Although many criteria are considered, ranging from legislation to violence against journalists, democratic countries occupy the top of the index while dictatorial countries occupy the last three positions. Again it is the same three as last year – Turkmenistan, North Korea and Eritrea.

Coinciding with the release of its 2013 Press Freedom Index, Reporters Without Borders is for the first time publishing an annual global “indicator” of worldwide media freedom. This new analytic tool measures the overall level of freedom of information in the world and the performance of the world’s governments in their entirety as regards this key freedom In view of the emergence of new technologies and the interdependence of governments and peoples, the freedom to produce and circulate news and information needs to be evaluated at the planetary as well as national level. Today, in 2013, the media freedom “indicator” stands at 3395, a point of reference for the years to come.

The indicator can also be broken down by region and, by means of weighting based on the population of each region, can be used to produce a score from zero to 100 in which zero represents total respect for media freedom. This produces a score of 17.5 for Europe, 30.0 for the Americas, 34.3 for Africa, 42.2 for Asia-Pacific and 45.3 for the former Soviet republics. Despite the Arab springs, the Middle East and North Africa region comes last with 48.5.

The high number of journalists and netizens killed in the course of their work in 2012 (the deadliest year ever registered by Reporters Without Borders in its annual roundup), naturally had a significant impact on the ranking of the countries where these murders took place, above all Somalia (175th, -11), Syria (176th, 0), Mexico (153rd, -4) and Pakistan (159th, -8).

The Nordic countries have again demonstrated their ability to maintain an optimal environment for news providers. Finland (1er, 0), Netherlands (2nd, +1) and Norway (3rd, -2) have held on to the first three places. Canada (20th, -10) only just avoided dropping out of the top 20. Andorra (5th) and Liechtenstein (7th) have entered the index for the first time just behind the three leaders.

QCOSTARICA -  How has Costa Rica done during its first year in the fight against covid-19? If you ask the demographer Luis Rosero Bixby,...
Fashion & Beauty

Q MAGAZINE - Miss Costa Rica 2020, Ivonne Cerdas, will soon be traveling to Florida to represent the country in the Miss Universe pageant. After...
Health

QCOSTARICA - Loans in dollars, which had a great boom in 2000, began to slow down since 2016 and today, despite the fact that...
World

QCOSTARICA - Public worker unions from the Education, Health, Judiciary, Transport, and public universities, among others, will join forces this Friday, March 5, in...
Entertainment

The filming of the second season of the reality show “ReverseD” on the Discovery Channel officially began last Sunday, February 21, in Atenas, in...