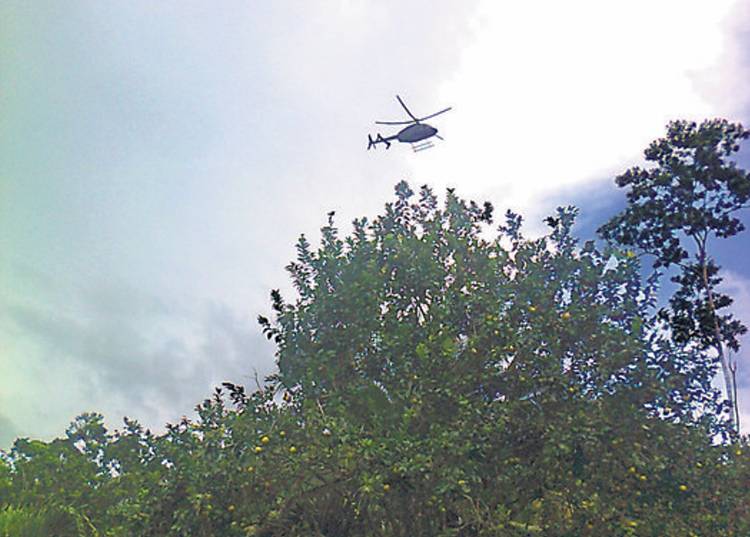 The residents of Cutris de San Carlos, in the northern zone remain fearful for the presence of a suspicious helicopter and the lack of a permanent police presence.

Almost two weeks ago police discovered in Cutris a helipad, arms and a campsite suspected of being used by drug traffickers operating in the Caribbean and northern zone.

On Saturday, residents once again alerted authorities to a suspicious helicopter flying over their area. One woman managed to photograph the flying bird, as it passed near her home in the morning hours.

Witnesses say the helicopter headed south into Costa Rica from the Nicaragua, crossing the San Juan river and headed for either Limoncito or Patastillo de Cutris.

At 8:15am, it was again seen flying back through El Carmen and headed toward the Biológica Indio Maíz reserve, on Nicaraguan soil.

Authorities suspected the green coloured chopper is the one using the clandestine helipads discovered in Cutris, Astuiras de Pococi and Guácimo, that were dismantled by in the past ten days. Also found in the camps were firerams, cash and fuel containers.

Chavarria added that these organizations are operating with the support of Honduran military or former military personnel, and have a strong local support network.

So far, only two people have been arrested.

Residents fear that the alleged traffickers are back in the area to recover something that is important to them and fear reprisals and lack of police presence in the sparsely populated area.

Carlos Herrera, community leader of the Asociación de Desarrollo de Coopevega, told La Nacion “…we prefer to remain silent for not only fear of reprisals, but the police may abandon us…there should be a permanent police station, and not just patrols of the area, the distances are considerable and the roads in bad condition.”