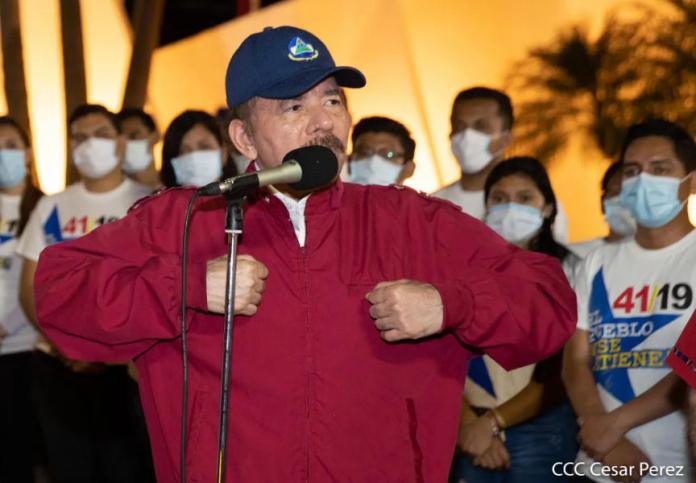 TODAY NICARAGUA  – There are less than ten months to go to the 2021 general elections in Nicaragua, although they still haven’t been formally convened. For Nicaraguans living outside the country, political analyst Manuel Orozco warns, there’s no assurance they’ll be included.

Orozco currently directs the Center for Migration and Economic Stabilization, based in Washington D.C. He’s convinced the Daniel Ortega regime “won’t guarantee” the right to vote for Nicaraguans who live in other countries.

It “would subtract votes” from him.

“Political realism tells you that Nicaraguans living outside the country should be assured their right to vote. However, Ortega’s political pragmatism will tell him that it subtracts votes from him. As a result, they won’t be guaranteeing it,” affirmed Orozco, during an interview on the weekly internet news program Esta Semana.

The expert studies the impact of migration across the world. In economic terms, Nicaraguans in other countries send home in remittances approximately US$1.7 billion a year.

“These remittances support 600,000 families. These citizens are voting with their work. They demand political reform, they want a transition, and also a mature opposition,” added Orozco, who is critical of the Nicaraguan opposition’s tendency to engage in “infantile games while they quibble, they disconnect themselves from the daily reality citizens face.”

“The primary thing [for Nicaraguans] is to have a job, have an income and be able to eat. Having space to think about a better quality of life, while freedom and more ability to express yourself is a lower priority. Maybe in fourth place. Right now, it seems to me, the opposition is a little disconnected from that reality,” he commented.

The political analyst noted that the opposition seems “a little self-absorbed” in the way they organize politically. This is also true in their demands for electoral reforms. Meanwhile, he maintains, people are concerned about the high cost of living. They’re worried about the economic impact of the political crisis, the pandemic and the international crisis. “All that must be resolved, because it affects them,” he urged.

Daniel Ortega’s strategy: benefits for his support base

Manuel Orozco projected that Ortega’s Sandinista party, the FSLN, will maintain their policy of offering benefits to their “clientele” (people who support the party and the Sandinista movement), for example,  by giving food out to some people, to “keep them happy”.

“In reality, the tactics of the Nicaraguan government are deceitful. Those receiving the benefits know it’s not the best thing they could have. But they also know there’s no alternative because no one else is putting food on their table. Unfortunately, the policy of political patronage is ingrained in Nicaraguan politics, and it continues being the dominant practice at the grassroots,” Orozco explained.

Orozco warns that the benefits the Sandinista Front gives its clientele, “aren’t going to increase.” Nonetheless, they’ll be visible during the electoral process. “That really constitutes a campaign opportunity for the current government.”

There are both national and international demands for electoral reforms in Nicaragua, to guarantee fair, free, and transparent elections. Such elections should include independent observation.

Nonetheless, Manuel Orozco believes that entities like the Organization of American States (OAS) don’t really expect to see such reforms.

“They’re clear that there’s little perspective or probability that Nicaragua will introduce electoral reforms before May,” said Orozco.

According to Orozco, OAS members “are pondering what other pressure tactics they can exert to obtain a political commitment. Some kind of legal reform that will allow guarantees of an electoral process that’s at least somewhat valid or legitimate.”

He feels opposition groups and even organizations like the OAS should take into consideration the real possibilities: “A real electoral reform is improbable. On the other hand, there’s the possibility of a political agreement, so that at least Nicaraguans have enough trust to go and vote.”

Biden administration may utilize “other means to apply pressure”

Orozco foresees that the pressures on the Daniel Ortega regime will increase under the government of Joe Biden. He believes there’ll be “an expansion of greater forms of pressure. There’ll be more concertation within the inter-American system, especially coordination with countries of the region. Those joint actions will be aimed at continuing the pressure for political reforms in Nicaragua.”

Whether the United States is being led by Republicans or Democrats, the policy on Nicaragua is unlikely to change, Orozco explained.

Both parties agree on the importance of “pressuring Ortega, in order to obtain political reforms”. Moreover, he warned that the change of government in the United States isn’t good news for the Daniel Ortega regime.

“The [Biden] administration has no tolerance for anti-democratic governments. What could possibly change are the methods employed. Not only will the sanctions be broadened, but also they’ll be employing other forms of pressure. These will likely include some type of bilateral and multilateral diplomacy(…) In no way does being a Democrat mean being pro-dictatorship,” he warned.

Bad signs for the economy

If the Nicaraguan government doesn’t cede to pressure and continues “criminalizing democracy”, Orozco predicted, the economy will continue to suffer. Right now, the signals coming out of Nicaragua are unfavorable for the economy.

National and international financial entities are predicting a weak performance of the Nicaraguan economy in 2021. They believe that the growth rate will fall somewhere between a negative 0.9% and positive recuperation of 1%. Or, possibly, the government projection of 2.5% growth.

The Nicaraguan government, through presidential economic adviser Bayardo Arce, has sent out feelers to the private sector. Through Arce, they’ve indicated their “interest” in a dialogue with the private business leaders.

However, the private sector business associations made their positions clear. They insist that the country’s economic problems can’t be resolved while Nicaragua’s sociopolitical issues remain unresolved. That means respect for the rights and liberties of Nicaraguans.

Michael Healey, president of the Superior Council of Private Enterprise (Cosep), has reiterated this position of the private sector. Manuel Orozco noted that this posture, although not new, is “important”. “He’s saying there’s a clear disposition among the private sector. If they’re going to open positive doors through political gestures, it’s important to put Nicaragua first. That’s the view of the micro, medium and large formalized Nicaraguan companies.”

Moreover, he recalled that the private sector has paid a price for maintaining this posture. The government has implemented punishing tax reforms. These have had “an effect on the capacity of the formal Nicaraguan companies (…). They’ve been penalized with a 15% tax increase, on top of what they were already paying.”

Manuel Orozco highlighted that on an international level, the government’s criminalization of democracy holds “important weight”.

“It affects the decisions that investors make. He noted that, in the current climate of Nicaragua, the incentives are not at all attractive for such investors,” concluded Orozco.