Former British Prime Minister David Cameron (2010 to 2016) has been chilling on a sunny beach in Costa Rica while Theresa May’s government has been sent into meltdown over Brexit, the impending withdrawal of the United Kingdom from the European Union.

Cameron, who called the EU referendum, has been on a family holiday in Costa Rica’s Playa Hermosa* with its 33 Celsius plus temperatures and sunny weather. He was spotted out surfing on the getaway with his wife Samantha and children.

Cameron has been slammed for calling the divisive referendum and then quitting as Prime Minister as soon as he lost the 2016 vote – leaving May to pick up the pieces.

A worker at the local surf shop told the Daily Mirror that Cameron rented a 9 foot surf board for three days. They told the newspaper: ‘It was only because of his security we realized he was someone famous. We had to google him. He seemed very relaxed and didn’t appear to have a care in the world. He surfed for about three days. He loved the waves here.” 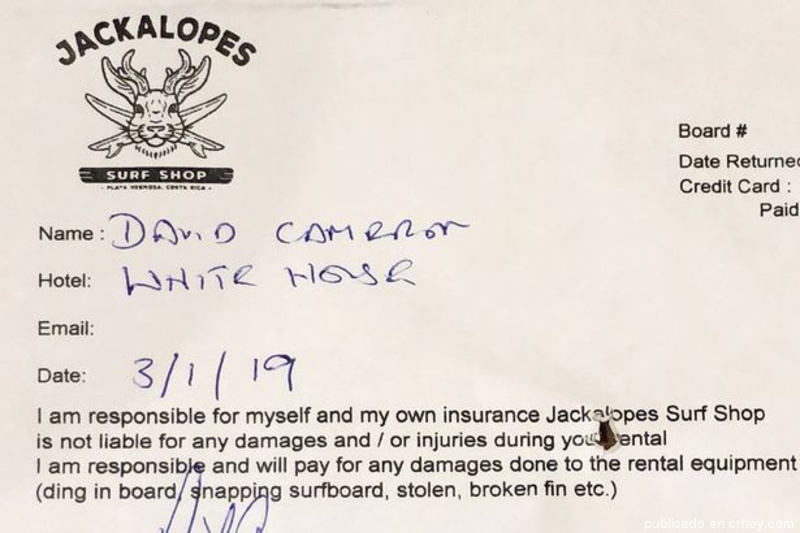 Cameron is well known for his love of surfing. He was often photographed in his wetsuit and clutching his board while spending his summer holidays while Prime Minister.

A worker at a local coffee shop, Café Social, a commonplace to see many celebrities while vacationing in Ticolandia, including Victoria’s Secret former model, Gisele Bündchen. “He was very carefree. If you can’t relax here you cannot relax anywhere. They (Cameron and his wife) ordered breakfast and then left together. My sister-in-law is British and it was she who recognized who he was,” said one of the staff.

While in Costa Rica, Cameron stayed at ‘The White House’ located beachfront on Playa Hermosa*, just a little north of Santa Teresa in the Mal Pais Area, in Puntarenas, in Costa Rica’s Nicoya Peninsula.

Immigration records indicate Cameron entered Costa Rica on December 22, 2018, through Juan Santamaría International Airport, and remained in our country until January 3, 2019, when he left for that same air terminal.

Back in the UK, Cameron has been accused of deserting his country after he broke his promise and quit after losing the referendum.

*There are three – yes 3 – Hermosa beaches in Costa Rica: the first two in the province of Punaternas – one south of Jaco and in the other in the Nicoya Peninusal – the third in Guanacaste.

With notes from the Daily Mirror UK, test by Qcostarica

- Advertisement -
Paying the bills
Previous article“You Are not a Legitimate President”: OAS Message to Maduro
Next article90% of Law Graduates Failed Their Bar Exam