Bukele said "Costa Rica gives the perception of having flattened the curve, but the only thing they are doing is that the number of daily tests has decreased ”

Bukele said "Costa Rica gives the perception of having flattened the curve, but the only thing they are doing is that the number of daily tests has decreased ”

The president of El Salvador, Nayib Bukele, took advantage on his country’s national network Tuesday night to say that Costa Rica “gives the impression of having flattened the curve, but all they are doing is that the number of daily tests has decreased ”, referring to the praise Costa Rica was given in the international media the last few days. 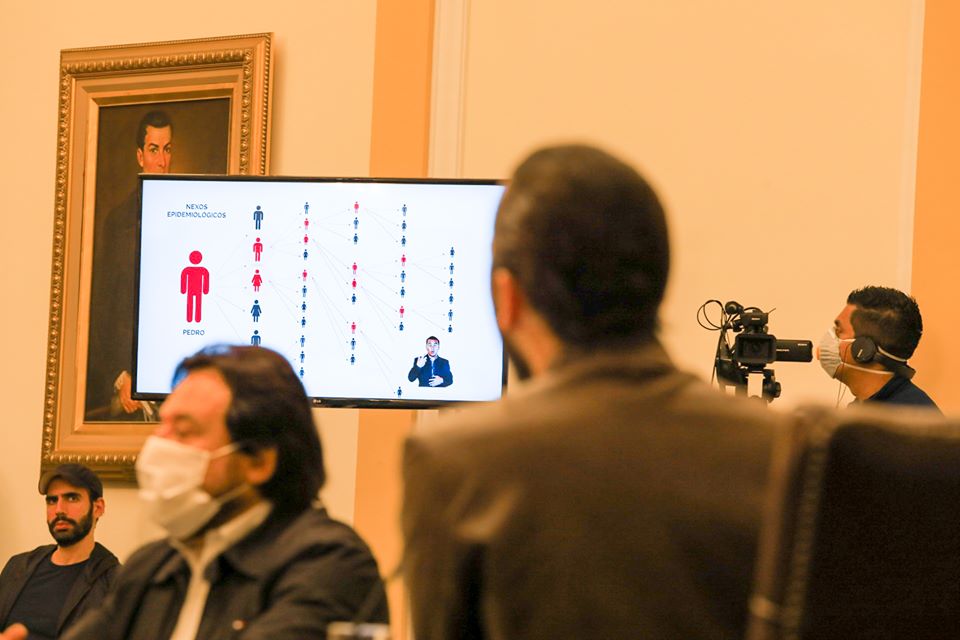 Bukele was his country’s national network to communicate a series of enw measures that will be applied as of midnight on Thursday, May 7, related to the attention of the pandemic in El Salvador.

The Salvadoran president posted quotes from his speech on his Twitter account and in one of them, he mentioned that “We do not want to make the same mistake as Costa Rica and other countries. Costa Rica gives the perception of having flattened the curve, but they have only lowered the number of daily tests having the ability to do more.” 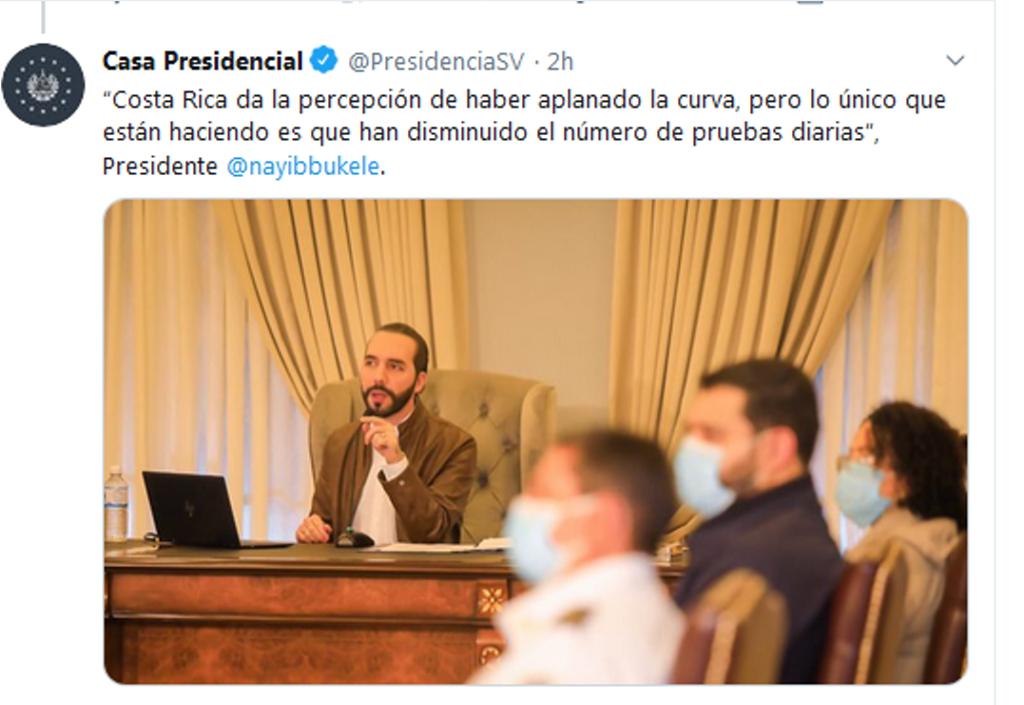 However, Bukele did not present any data or source to support his claims.

(In the video above, Bukele at minute 23 refers to Costa Rica)

Immediately the social network lit up with comments to Bukele’s unfounded arguments, in fact, his last name became a trend on Twitter.

Adjectives like ignorant, charlatan or clown were some of the most used words to respond to Bukele.

Among those who responded and put the President of El Salvador in his place are former Health Minister María Luis Ávila and former President of the Legislative Assembly, Carlos Ricardo Benavides (who ended his one year term on Friday, May 1).

“Costa Rica also gives the perception of having more than 70 years of not having an army, of investing in health and education, of having exemplary social security and of working every day to avoid authoritarianism and protect our democratic system”, wrote Benavides.

On Tuesday, Costa Rica confirmed 755 cases of covid-19, an increase of 13 compared to Monday, when there were 742.

The Minister of Health, Daniel Salas, reported that 12 of the new cases were confined to an outbreak at the Central Regional Apprehension Center (CARC) – the immigration holding center – in Heredia, when two detainees were confirmed on Saturday and infected 12 others by Monday.

Health Minister Daniel Salas, at the daily press conference, reported more than half of the cases as recovered and that only 17 patients are hospitalized, 5 of whom are in intensive care. The number of deaths remains at 6.

Currently, El Salvador reports as of this morning, Wednesday, 633 confirmed cases, 14 deaths (eight more than Costa Rica), and 87 patients hospitalized for covid-19 infections, 17 of whom are serious or critical.

Bukele told his people Tuesday night that he will step up authorities’ work to identify the virus. “Starting Thursday, if you break home quarantine, you will be examined by a doctor and if that doctor verifies that you have been exposed to the virus, you will be transferred to a quarantine center,” Bukele told his nation.

Bukele lied when he stated that Costa Rica made a “political decision” to reduce the number of tests carried out and that this explains the decrease in the curve of cases. The current guidelines of Costa Rica were issued by merely technical authorities on the matter and the country has one of the broadest definitions of a suspected case in the region, which allows testing of COVID-19 to people with symptoms that in other latitudes do not would be tested.

Today, for example, any person with acute respiratory infection (fever and at least one sign or symptom of respiratory disease such as cough, shortness of breath, sore throat, nasal congestion) and who meets at least one of the following criteria:

Even with this broad definition of a suspected case, the country’s success in containing contagions (so far) translates into a gradual reduction in the number of suspected cases, and therefore, of the tests that are carried out per day.

Costa Rica had the ability to identify the epidemiological link in more than 90% of confirmed cases, which limits the danger of sustained community transmission of the virus in the country, breaking transmission chains.

Instead, the government of El Salvador (which was one of the last to recognize that it had a presence of COVID-19 in the country) had to choose to carry out ‘massive tests’ and the mandatory confinement of its population, recognizing that they are in a stage of “maximum community contagion”.

Costa Rica, on the other hand, uses the aggressive testing technique as was the case of the Carlos María Ulloa Nursing Home and more recently the CARC.

This type of testing consists of the fact that at the time of identifying a confirmed case in a high-risk population (such as seniors, prisoners and now returnees), tests are performed on all or almost all of the people in that group.

The application of massive tests in countries like Costa Rica where there is no community transmission of the virus would constitute the waste of an instrument whose international demand is extremely high at the moment.

The World Health Organization (WHO) itself points out that the ‘massive’ tests (also not understood as testing the entire population) should be applied in countries where there is community transmission, that is, a large number of cases where epidemiological links cannot be identified, since the strategy to have Controlled the pandemic is testing, tracking, treating and isolating.

Costa Rica, in addition, activated vigilancia centinela (sentinel surveillance) with which all medical centers identified as such are obliged to send a minimum of tests per week to Inciensa (national laboratory for the coronavirus) to be analyzed for COVID-19 and other respiratory viruses so that authorities have an overview of which respiratory viruses are circulating in the country and see if there is undetected transmission of the new coronavirus.

To date, the results of the tests applied by this type of testing have been negative, ruling out community transmission.

There are also notable differences between the virus case fatality rate between Costa Rica (six deaths; 0.86%) and El Salvador (14 deaths; 2.68%, three times more than our country).

In addition, Costa Rica managed to decentralize the conduct of the COVID-19 tests by sending diagnostic teams to rural areas, which reduces the time it takes to obtain a result and thus allows authorities to expedite their contact search work and breakdown of transmission chains.

In El Salvador, by contrast, there are documented cases where several people have waited almost a month for their results.

In summary, the notable differences in the situation between the two countries make comparing testing approaches impossible, or at least technically incorrect, since on the one hand there is a country whose ruler acknowledges being in the stage of “maximum community contagion”, while the other managed to carry out sufficient epidemiological traces to break the transmission chains and prevent the virus from continuing to spread.

At the time of this post, neither Casa Presidencial (Government House) or the Costa Rican Ministry of Health have commented on Bukele’s statements.