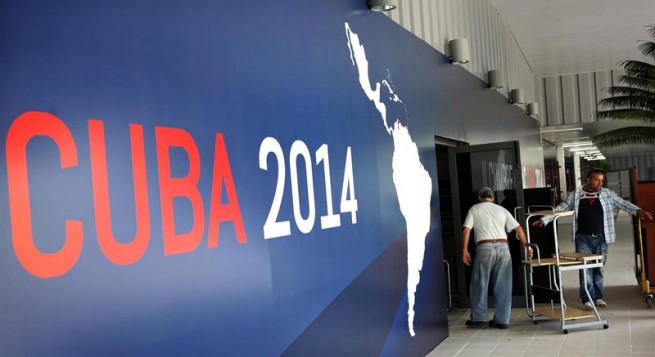 QCUBA – The Cuban capital is getting ready to receive the heads of State and Government of the 33 nations of the Community of Latin American and Caribbean States (CELAC), which will held its second summit on January  28 and 29.

Pabexpo fairgrounds, the venue of the event, are almost ready to host the meetings of experts, foreign ministers, and later of heads of state and government, who should approve important resolutions and the CELAC’s Action Plan for this year.

The struggle against poverty, hunger, inequalities in Latin America and the Caribbean, slogan of the summit, will be the focus of the debates this time.

The opening of the press center of the Summit, which should receive hundreds of journalists of the continent, is scheduled for Friday, January 24.

The presidents of all countries of the hemisphere, except the United States and Canada, are expected to arrive on January 27. Some of them will carry out State visits to Cuba.

According to the program, the Second Summit will be inaugurated on January 28. Later on, the statesmen will have a closed meeting before the first plenary session of the event.

Participants in the summit will be received that day by President Raul Castro at the Presidential Palace, in the Revolution Square.

There, an artistic performance will honor the distinguished visitors, to whom Raul Castro will offer a welcoming dinner.

Likewise, a series of remodeling works has been done in this city before it becomes the capital of Latin American and the Caribbean.

The Cubana de Aviacion Corporation announced that all measures to receive the foreign delegations are taken, and the services provided by the Jose Marti International Airport will continue.

QCOSTARICA - Vaccination centers against covid-19 were transformed this Saturday to be able to vaccinate more people. Universities, civic centers, parking lots and even...
Reports

QCOSTARICA - The Caja Costarricense de Seguro Social (CCSS) reports that 70.3% of people over 58 years of age, the so-called Group 2 of...
Coronavirus

(DW) Jon works for the local government in the US state of Virginia. The 40-year-old received both his COVID shots in April. Most of...
HQ

QCOSTARICA - Costa Rica received this Sunday morning, June 6, the second direct shipment from AstraZeneca of vaccines against covid-19. The flight landed at 11:05...
Trends