The Interlinea – intersectoral bus routes of San José – got closer to reality today with the publishing in La Gaceta of the government decree reviving the plan that stalled in 2008. 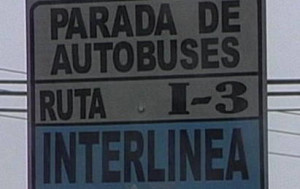 The Consejo de Transporte Público (CTP) now has three working days to put the plan into action, with the objective of providing relief to the traffic congestion cause by the temporary closure of the Circunvalacion.

Silvia Bolaños, deputy minister of Transport, this morning confirmed meetings will be held all day today between Transport officials and bus operators to determine the number of buses required on each one fo the routes.

Later today we will also learn the day the buses will begin to roll.

The Interlinea project is temporary, to run for the next three months and cost ¢350 colones each way on the following routes: Desamparados-Moravia; Guadalupe-Uruca and Uruca-Escazú.

By Amy Gdala, Guest Contributor - The US has a surplus of vaccines, while Costa Rica is struggling to supply sufficient numbers to citizens...
Corrupion