Investors Shying Away From Marina Projects in Costa Rica

A significant drop in sports fishing tourism and the global financial crisis are to blame for causing investors to shy away from marina projects in Costa Rica. According to a recent report by business journalist Ana Cristina Camacho Sandoval of El Financiero, out of 21 marina projects that filed for permits in 2007, only nine remain -and they are all stalled. 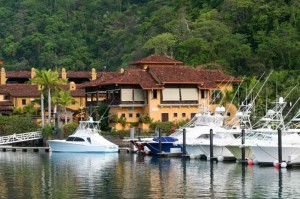 Sixteen years ago, investors could have pointed their covetous fingers to the bureaucracy and inefficiency at ICT, Costa Rica’s government agency charged with oversight of the tourism industry. ICT gives the final green light to marina projects dedicated to luxury yacht docking and sports fishing, and in the past the agency was notorious for its strict adherence to “Tico time” and excessive bureaucracy. That changed with the passing of Public Law 7774, which deals with marinas and other docking installations that cater to tourism.

Public Law 7774 recognized the importance of providing boating and sports fishing enthusiasts who travel to Costa Rica adequate installations to partake in their hobby. To this end, the law directed ICT to streamline their marina approval process. This law was passed in the late 20th century, and it was prescient insofar as predicting the dot-com and housing market bubbles of the United States and the ensuing influx of cash into Costa Rica. Unfortunately, the tourism industry of Costa Rica could not predict the sheer downturn caused by the global financial crisis circa 2008.

The Plunge of Sports Fishing Tourism

A recent survey taken by ICT among travelers arriving at the two major international airports of Costa Rica, SJO in Alajuela and LIR in Liberia, a respectable 7.3 percent of tourists came to our country for the purpose of deep sea fishing. These are mostly tourists from Canada and the United States. In 2009, that percentage had dropped to 6.2 percent, and last year it was down to 4.8 percent. To put these percentages into perspective, it helps to know that more than 70,000 visitors to Costa Rica engaged in sports fishing in 2012.

The report on El Financiero indicates that the three major marinas in Costa Rica have felt the effects of the global financial crisis; however, the fact that no other marinas are rising up as competitors gives them certain peace of mind. We are talking about the ritzy Marina Los Suenos in Playa Herradura and near Jaco Beach, Marina Papagayo in Guanacaste and Marina Pez Vela in Quepos. Despite several issues related to squatters and agrarian law on nearby land, Los Suenos is the crown jewel of all marinas in Costa Rica, a tourism magnet that is 90 percent booked during the green (rainy) season and 100 percent the rest of the time.

The sheer success of Los Suenos put dollar signs in the eyes of many would-be marina entrepreneurs and investors eager to emulate a similar level of monetary achievement. Out of the 21 marina projects that had their permits expedited by ICT, only four look like they are (barely) moving forward: Las Gaviotas, Bahia Banano and Bahia Cocodrilo in Golfito, as well as El Coco in Guanacaste. The rest of the projects have either withdrawn or are stalled due to lack of investors and environmental concerns.

ICT and environmental regulatory agencies in Costa Rica have grown stricter over the years. Even as marina developers strive to meet environmental standards, watchdog groups remain vigilant -thereby making investors nervous. Such is the case of Marina Moin and Resort in the Caribbean province of Limon, which at one point was intended to be developed into one of the world’s largest marinas; however, multiple red flags were raised by the Technical Secretary of National Environmental Affairs (Spanish acronym: SETENA) and the project was shelved.

The Caribbean coast of Costa Rica has a very rich diversity of wildlife and some of the best fishing in the world. Although this would make Moin a promising spot for a luxury marina and resort complex, there are numerous protected sea turtle nesting areas, wetlands and mangroves that force developers to think twice about their plans.

Most marina would-be developers in Costa Rica have been foreigners seeking foreign investors, which has lead some industry observers to speculate whether they know what they are getting into or if they are just making up quixotic plans to swindle initial investors -similar to the Nicaragua Canal that will ostensibly rival the Panama Canal.