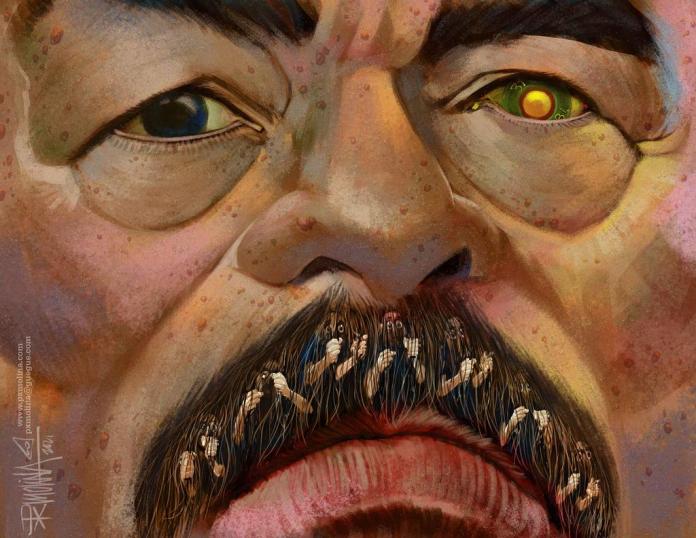 TODAY NICARAGUA – The masquerade that will take place on November 7 has no meaning for Nicaragua’s future. It won’t bring change or stability. The dictator’s self-coronation, apart from more of the same, will only mark the imminence of a new crisis.

Much of his instability stems from the cruelty shown against his potential opponents. It will be the logical harvest of his policies of violence without discussion, and of violent speeches, of brutality as official policy, of the sadism that has displaced the former Sandinista school of thought.

There are two images that reflect this displacement of the narrative, in favor of winning the heart of the people by exploiting icons. In the first, a guerrilla group poses in the mountains with their faces uncovered; in the second, the paramilitaries pose in a small plaza of Masaya with blue t-shirts and hooded faces.

The Islamic State doesn’t say ‘It’s war, so we have the sad duty to commit atrocities in order for good to triumph.’ It doesn’t defend sadism. In order to get converts, it depend on sadism, exhibits sadism, claims an authorization to be sadistic.” Emmanuel Carrere

The first portrayed the guerrillas’ [of the 1960s & 70’s] vow of “Free country or die”, or PLOM [Patria Libre o morir”], as they signed their communications. In the second though, the slogan is abbreviated as PLOMO, which also means the lead bullets of death. In other words, they’ve mutilated the promise of freedom, and have been left with death, causing the greatest harm and pain possible. They’re offering the violence of sadism.

Writing from the old Palace of Justice in Paris, journalist Emmanuel Carrerre has chronicled the recent trials of the terrorists who struck the city on November 13, 2015. He states: “The Nazi propaganda didn’t show Auschwitz; the Stalinists didn’t display the Gulag; the Khmer Rouge didn’t show the S21 torture center. Propaganda normally hides the horror. Here, though, (ISIS) put it on full exhibition.”

Transposing this to Nicaragua, we can affirm that Ortega’s propaganda machine lynches whoever they consider their enemies. They shoot them point blank with snipers, they imprison them in subhuman conditions, and they torture them at all hours. First, they authorize the sadistic behavior of their agents, and later they boast of maintaining the greatest possible quotas in the El Chipote jail. But they’re not trying to convince anyone, only spread terror in order to subjugate possible rebels.

El Chipote is the black box of cruelty. But paradoxically, its extreme concealment has become the greatest showcase of their sadism. The latest illegal detentions of their political opponents have served to portray the limitless brutality of the dictatorship, with the only aim being to wreak vengeance on people who openly challenged the strongman, or who dared to dispute power in open and competitive elections.

What name, except sadism can we give the policies imposed by the dictatorship, locking people up for over 150 days with no evidence of any kind? Not only that, but to lock up people who very clearly aren’t implicated in any of the crimes that the official propaganda has invented.

It’s sadistic to keep them isolated, in conditions that can only be comparable to the Nazi extermination camps. It’s sadistic to starve them to death, in order to cause the collapse of their organisms. And it’s sadism to torture them by leaving the lights burning so they can’t sleep, or by confining them in dark cells until they become blind. It’s also sadism not to furnish them with so much as a piece of cloth with which to cover themselves at night; keep them from communicating with each other; and subjecting them to interrogations at all hours to break their will. Why would they continue to interrogate them after nearly five months in their power, if not out of sadism? What evidence do they hope to obtain, that they haven’t been able to achieve after all this time?

It’s also sadism against the family members, who are unable to see them or even bring them a piece of a tortilla. Worse yet, during the scant minutes they’ve been allowed to see them in all this time, they’ve been able to corroborate the physical deterioration the prisoners are suffering, without being able to appeal to any State institutions for relief.

It needs to be said loud and clear: it’s a systemic sadism against innocent citizens. Why else, except for institutional sadism and political calculation, won’t they permit the political prisoners to be seen in public? That’s the reason they hold summary trials in secret, within the dictatorship’s own dungeons. They don’t want the results of their sadistic practices to be known.

How long was Tomas Borge isolated and tortured [in the 70s]? Without forming part of any armed movement, nor having killed anyone, the current prisoners together have logged more time than Borge in isolation and under torture, in the most absolute state of defenselessness. Any of the terrorists being tried in Paris have more rights than these hostages of the Ortega regime.

A key link in this brutality are the torturers, who the regime has given free rein to perpetrate any atrocity, with which to ingratiate themselves with their bosses. These bureaucrats of terror are the scrupulous messengers of the new narrative, with which the dictatorship wants to suffocate any sparks of social protest.

In their hands, all hope must be abandoned, because – as with all black holes – no light escapes from El Chipote. Like the other Latin American dictatorships that spawned torture bosses such as Manuel Contreras in Chile, and Alfredo Astiz in Argentina, Nicaragua has Luis Alberto Perez Olivas, lord and master of El Chipote, as the operator who carries out the orders of the presidential couple in El Carmen.

Contrary to the early Sandinistas, who advocated living like the saints, there’s neither vision nor any epic quality in the profession of these dark figures, merely fanatical devotion to dismembering the bodies and wills of their victims.

As writer Eduardo Galeano denounced in 1983: “Who tortures? Five sadists, ten madmen, fifteen clinical cases? They torture the good heads of families. The officials punch their clocks, and later go home to watch television with their children. What’s efficient is good, the machine teaches them. Torture is efficient: it rips out information, it breaks consciences, it spreads fear. A Dark Mass complicity is born and developed.”

It’s for a reason that the dictatorship tries to disguise this in their electoral campaign. It’s not the disjunctive between “Sandinismo or sadism” that will be settled on November 7, it’s the choice between sadism and empathy. Between the doctrine of extermination, and the inalienable right to life; between taking pleasure in cruelty, and the humanistic vocation. However, despite all its barbarity, sadism has a short road. The path to the tribunals, as has been seen in other countries, ends up being a short one. In the end, justice will impose itself over sadism.

This article was originally published in Spanish in Confidencial.com.ni.

- Advertisement -
Paying the bills
Previous articleVehicle Restrictions: Only night restrictions in place from 11 pm; Daytime restrictions ONLY in San Jose center
Next articleLeverage Trading and Crypto: Regulators Made a Signal

From Nicaragua to China, reckless autocrats betray the promises of revolution

QCOSTARICA. #DEBUNKED. It is not true that Costa Rica's...
Infrastructure