QCOSTARICA – The Minister of Public Security (Ministro de Seguridad Pública), Gustavo Mata, posted on his Twitter account on Friday, the arrest in Nicaragua of Adrian Salmero Silva, the suspect in the Matapalo massacre.

Salmeron is suspected of killing five people whose bodies were found with stand wounds on Tuesday. According to the Judicial Investigation Organization (OIJ), the massacre would have happened last Sunday.

Mata stressed that as Nicaragua does not extradite its nationals, “Costa Rica will do everything to have him tried there”.

In Costa Rica, Nicaragua’s Ambassador, Harold Rivas, explained that part of his country’s Prosecutor’s office (Fiscalia) will be in touch with their counterparts in Costa Rica, to request evidence against the suspect.

“In such cases, the process will move quickly. I will know more details later,” said Rivas.

The director of the OIJ, Wálter Espinoza, said they have already forwarded their files in the case to the Ministerio Publico (Prosecutor’s Office), for them to review and act as they see fit. Espinoza added that their investigation of the case is continuing. 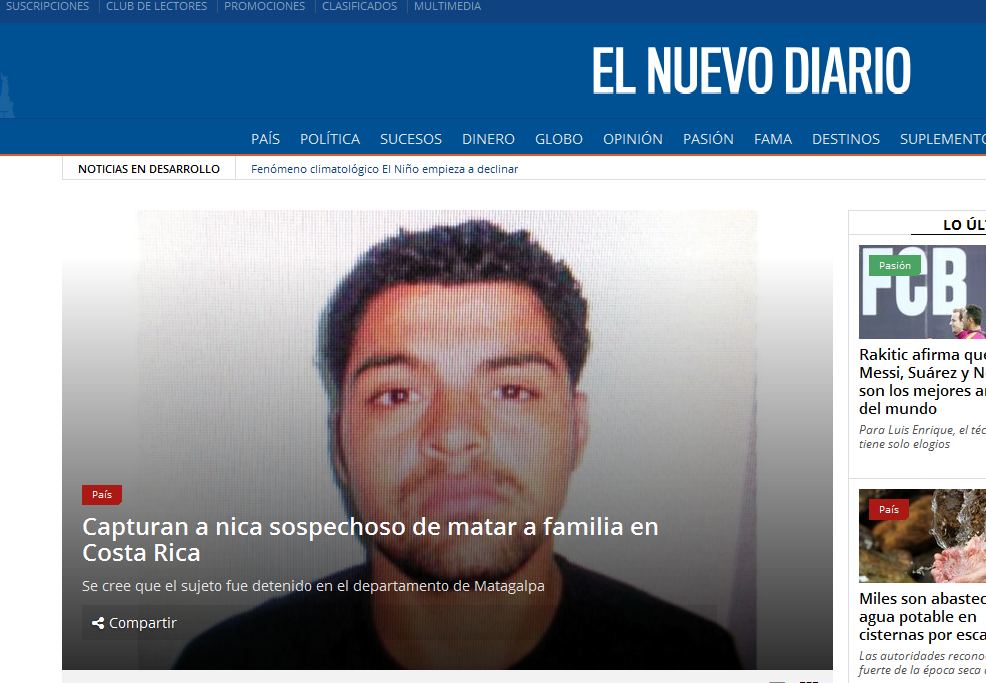 According to the report by Radio Ya in Nicaragua, the first to break the story, Salmeron was captured in the area of La Morraja, in San Francisco Libre, northeast of downtown Managua. Both the La Prensa and El Nuevo Diario, Nicaragua’s leading newspapers are giving the arrest ample coverage.

Tuesday morning the bodies of Dirk Beauchamp, his wife, Jessica Duran and their three children were discovered in the quiet community of Matapalo. Inside the house were two other children: a four year old, who remains hospitalized at the Hospital Nacional de Niños (Chidlren’s hospital in San Jose) with stab wounds, the daughter of Dirk and Jessica; and a seven month old, who suffered no injuries and being cared for at the Hospital La Anexión, in Nicoya, believed to be the child of Jessica and the suspect.

Costa Rica lies in Central America with a shoreline...
Travel