Nosara Offered Its Best Waves in the 2013 Kingston Cup

By Ariana Crespo/ Voice of Nosara – The sixth date of the 2013 Olympus National Surf Circuit ran the waves of Guiones beach last weekend, May 25 and 26. Nosara welcomed the Kingston Cup with a lot of greenery, a bit of rain and waves worth talking about.

The competition started off with good quality waves and strong sets. Being rainy season, the sky was overcast. However, the public enjoyed nice sunshine during several periods throughout the day.

The morning of Saturday, May 25, was characterized by varying winds that improved the condition and form of the waves, so by the middle of the first day spectators could watch aerials being performed.
The judges worked for 12 hours straight during the first day while the surfers entered and exited the water. At 6 p.m. the quarterfinals qualifiers of the Kingston Cup were already defined.

The quarterfinals started on Sunday, the 26th, in the morning, and by then familiar names were being heard like the McGonagle siblings. Leilani McGonagle classified for the Boys finals (the only woman), Junior girls and for the female open. The favorite of many, her older brother, Noe Mar McGonagle also classified in the junior and male open categories. The 2012 national circuit champion, Gilbert Brown, also managed to lead the qualifying list for the final of the male open.

Among the locals who stood out in the tournament was Nosaran Cristian Santamaria. This surfer left his short board and classified for the long board final. He obtained first place with a long right that allowed him to show us his best walk on the board almost reaching the shore of the beach.

Another local from Guanacaste was little 12-year-old Malakai Martinez, who came from Tamarindo to celebrate not just his birthday but also a first-place win in the mini grommets category.

In Juniors, Jason Mora and Noe Mar McGonagle fought for first place. Jason showed his competitiveness and gave us several complete examples of “power surfing.” However, it wasn’t enough to defeat McGonagle, who, in the last minute of the heat, took a right of 7.10 that earned him first place. 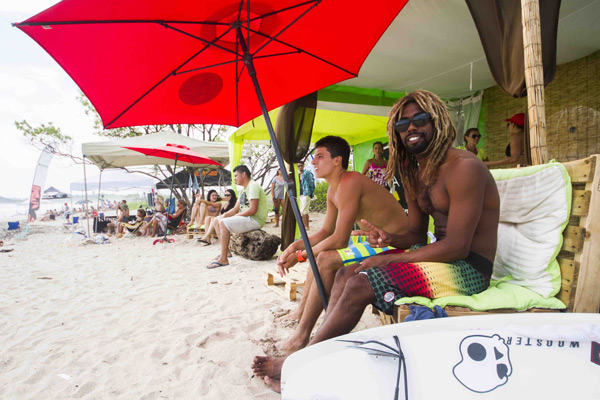 Here are the final standings of the tournament by category:

The last time that the National Surf Circuit visited Guiones Beach was in March of 2011, where the final tournament was played, a date remembered by some as one of the best finals on record in the history of Costa Rican surf.

For this 2013 tournament, Guiones Beach was in charge of entertaining the public for two days. The Costa Rican Electric Institute (ICE) set up a Kolbi internet post through 300 meters amongst the nature of the Ostional Refuge to be able to transmit the entire tournament and announce rankings. The Costa Rican Surf Federation provided live updates of tournament scores and schedules on www.surfingcr.net.

This activity was possible thanks to sponsorship from several brands that had activities and prizes for the public during both days (Adrenaline, Kingston, Off, 979, Costas Verdes, Quicksilver, Reef, Wipeout films, Maui clothing line, Olympus and others). Among the prizes and gifts of the weekend were the best Kingston head made of sand and a camera given for the most creative photagraphy with smartphone on both days.

Adrenaline kept those in attendance hydrated wiht free samples of their energy drink and throughout both days there was no lack of models on the beach distributing a large quantity of products like frisbees, totebags, towels and baseball caps.

Here are the final standings of the tournament by category:

(QCOSTARICA) For the third consecutive day, the number of new cases has been under 1,000; on Tuesday the Ministry of Health reporting 890 new...
Read more
Economic Policy

Government fears “very drastic” consequences of not agreeing with the IMF

(QCOSTARICA) The Government affirmed Tuesday night, on a national television broadcast, that the country could face "very drastic" consequences if the agreement with the...
Bolivia

(Q24N) With roughly one month to go until the Bolivian general election, the country is descending into violent political strife. On September 20, for...
Cartago

(QCOSTARICA) Though it has yet to be confirmed through forensic analysis, the Organismo de Investigacion Judicial (OIJ) located a femur and a piece of...
Health

(QCOSTARICA) - Surely, like many, you have not been able to travel in 2020 because of the pandemic, but as borders are reopened there...