OIJ Looking Into How To Reach Sunken Boat On Ocean Floor 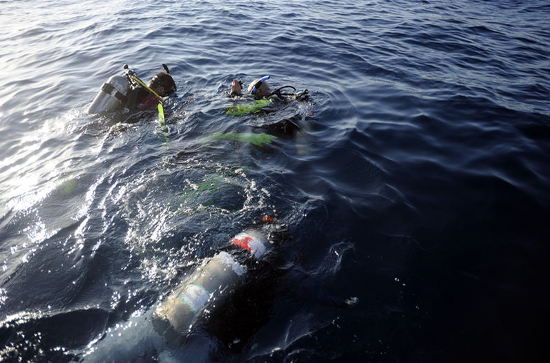 QCOSTARICA – The Organismo de Investigación Judicial (OIJ) says it is looking into how it can reach the depths of the Pacific to get to catamaran that sunk Thursday.

“The OIJ does not have the equipment and I believe no one in Costa Rica has; if there is, we will use it. We are making inquiries,” said Francisco Segura, director of the Judicial Police.

Segura said that vessel itself is the clue to what really happened and if there was negligence on the part of the captain and/or the crew.

Thursday morning the boat with 99 passengers and a crew of 10 capsized on route from playa Herradura to Isla Tortuga. All but three survived the ordeal. The fatalities were: Sharon Johnston (70) of Canada, Edna Oliver (68 years) of the U.S. and Ivor Stanley Hopkins, 80, of England.Their bodies were in the Judicial Morgue in San Joaquin de Flores, Heredia, waiting to be repatriated.

Among the options being analyzed  by the OIJ is a request to the Colombian Navy, however, no steps have yet been taken in that direction says Segura.

Meanwhile, the OIJ is interviewing the rescued passengers, crew and witnesses to get a clearer picture of what could happened.

“Complicated.” is how Cristian Sanchez, captain of the Unidad de Buceo del Cuerpo de Bomberos (Fire Department’s Diving Unit). Sanchez the depth of recreational diving is about 40 metres and that with more technical tainting one can reach deeper. “In the country there are technical divers, but not active,” he explained.

“When we were in the area (of the wreck), we sought out oil stains or residues released from the boat but did not see any” he said.

Sanchez mentioned that, the use of a submarine equipped for investigation, not only for exploration, is one of the options to located the sunken boat and collect evidence.