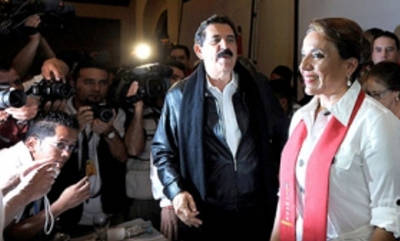 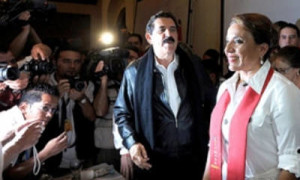 What is the last thing a violence-wracked, corrupt Central American nation needs as it seeks to fight transnational organized crime: contested presidential elections.  Welcome to Honduras.

The country’s Supreme Electoral Tribunal (TSE) has National Party (PN) candidate, Juan Orlando Hernandez, as the winner of  November 24’s presidential election, with 34 percent of ballots cast, based on results from over two thirds of polling stations, reported Europa Press.

Xiomara Castro, of the Liberty and Refoundation Party (LIBRE), received 29 percent of the votes, according to the official count. The TSE has said the results to the moment “reflect an irreversible trend” towards a Hernandez victory, reported AFP.

Castro’s husband and LIBRE leader, former President Manuel Zelaya, who was ousted from office in a 2009 coup, has refused to acknowledge the victory, and called for a recount of the votes. LIBRE leaders have claimed there were “serious inconsistencies” in the documentation of the results, according to El Heraldo.

Zelaya claimed, “We are going to defend the results of the victory… if necessary, on the streets,” reported Univision.

The 2009 ousting of Zelaya was a watershed moment for Honduras’ organized crime landscape. The coup left a political vacuum that allowed the country to develop into the principal air bridge for cocaine flights from South America almost overnight and to become the world’s most dangerous country as foreign criminal groups moved in.

The country has remained unstable throughout the administration of current President Porfirio Lobo, something reflected in the weakness and corruption of its institutions, and particularly the police. Up to 40 percent of Honduran police are thought to be involved in organized crime and ongoing police reform has seen little headway.

Additionally, Honduras’ street gangs, primarily Barrio 18 and Mara Salvatrucha (MS13) continue to be major drivers of violence, engaging in widespread extortion with immense power in the neighborhoods they control.

Regardless of how the electoral situation is resolved, calls of fraud by the political underdog reduce the legitimacy of the results. This is likely to make it difficult for the winner to rally national support, leading to a continuation of the country’s ongoing political crisis and polarization, providing criminal groups with the same unstable climate that has allowed them to flourish.