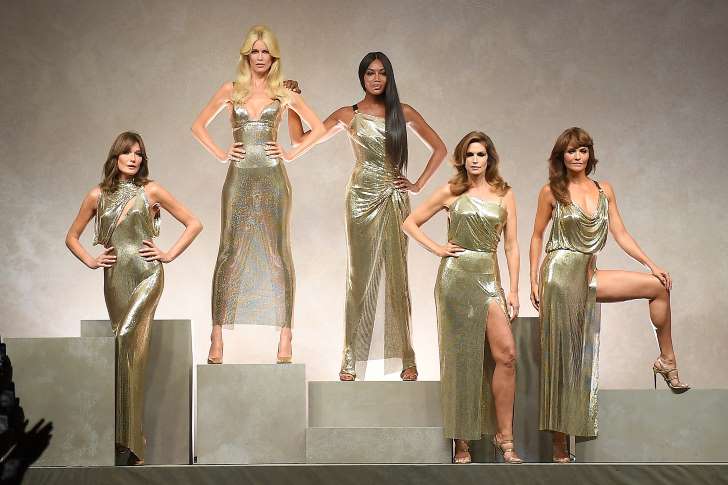 The new generation of supermodels (which now includes Cindy Crawford’s daughter Kaia) may be having a moment, but the original supermodels are having an era. And if you need proof, look no further than Milan Fashion Week. On Friday, Carla Bruni joined supers Cindy Crawford, Naomi Campbell, Helena Christensen and Claudia Schiffer for a stunning, shimmering walk down the Versace runway, paying tribute to the late Gianni Versace on the 20th anniversary of his death and paying homage to one of the most iconic modeling moments of all time.

After the spring/summer collection was presented on models including Gigi and Bella Hadid and Kaia Gerber, the show stopped to reveal the five legendary models, draped in the “dazzling metal mesh” Gianna Versace was known for, posing like goddesses against the backdrop. Then they descended from their poses to hit the runway with designer (and sister of Gianni) Donatella Versace.

The five models on Friday’s runway had all walked for Versace before Gianni’s murder in July 1997 (see Bruni, along with Campbell, Schiffer, Linda Evangelista, Amber Valletta and more below) and are often associated with the designer’s exuberant, colorful and often over-the-top pieces.

His sister Donatella has continued the house’s close relationship with models (many of whom the supermodels currently mentor – Naomi Campbell gives Gigi Hadid walking tips, and Cindy Crawford clearly has passed some tips onto Kaia), and clearly still maintains a friendship with the supermodels who are so closely associated with the brand.

QCOSTARICA - The Government on Thursday changed its bill...
Politics