TODAY PANAMA NEWS -Work on a third set of locks for the Panama Canal, as part of a canal expansion project, is 70% complete on the Pacific side.

On Friday, Gustavo Rivas, representative of the Pacific-side project, took reporters on a tour of the site organized by the Panama Canal Authority (ACP), the agency that manages the waterway. 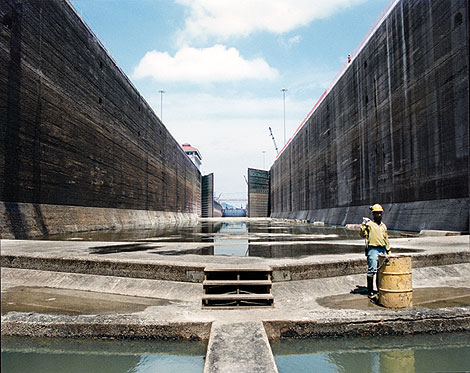 Some 88% of the concrete, or 2.1 million cubic metric tons, has been laid, the excavation work is practically finished, and a little more than 50% of the earth needed to fill the set of locks has been placed, said Rivas, adding that the new locks will be finished by the end of the year.

Workers are now putting in the preliminary installations for the floodgates, an indication that the work is progressing as planned, said Rivas.

The ACP reported on July 23 that the expansion project, which features new locks on the Atlantic and Pacific sides of the canal, was 76.6% complete as of the end of June.

The Panama Canal expansion project (also called the Third Set of Locks Project) is intended to double the capacity of the Panama Canal by 2015 by creating a new lane of traffic and allowing more and larger ships to transit.

The project is planned to:

The project is expected to create demand for ports to handle New Panamax ships.