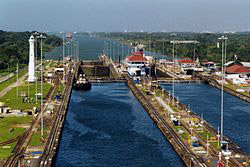 (QPANAMA) The Panama Canal celebrated on December 31,  14 years of national administration, after the concretion in 1999 of a historic agreement signed in 1977 between James Carter and Omar Torrijos which gave back to the country the sovereignty of the interoceanic via and its surrounding areas.

Since then, workers at the canal have been contributed with direct inputs for $ 8.5 billion, which is almost five times what was received by the country in 85 years of U.S. administration, which only gave Panamanians US$1.833 billion dollars between 1914 and 1999.

Currently, the oceanic pathway allows the passage each year of 14,000 Panamax vessels, and from June 2015 will duplicate that number with the entry into operation of the third lock for deep draft vessels post and superpost panamax, which is forcing a reshaping of the ports in the region.

Panamanians have displayed good management and operational management of the canal, contrary to what U.S. occupiers always repeated that the natives lacked intellectual capacity to cope with their task.

However, life has shown that they have done much more efficiently than their former operators without reporting any situations, accidents or serious errors in the work that is permanent throughout the year.

Today, Saturday, June 12, only ODDS can circulate. The measure is countrywide and applied between 5:00 am and 9:00 pm, save for those under the...
El Salvador