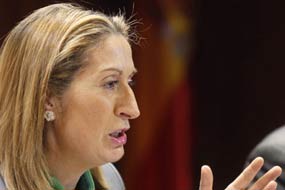 (QPANAMA) Ana Pastor, Minister of Public Works of Spain, mediates to find a solution to the dispute between Sacyr company and authorities of Panama Canal that jeopardizes extension works of that waterway. Sacyr company, which leads the construction of a third group of locks in the canal, keeps its request of $1.2 billion USD above the number agreed in the contract to continue the works.

On that regard, sources quoted by local press said that arbitrators could not agree with all requests, but they are willing to negotiate a compromise to resume works.

The United for the Canal Group (GUPC), which also includes the companies Impregilo from Italy, Jan de Nul from Belgium and CUSA from Panama, stated last Wednesday that increased costs and breaches of contract by Panamanian side hamper the works.

The Government of Panama rejected the statement while President Ricardo Martinelli announced his visit to Spain and Italy to request the enforcement of the contract, which was won in international tender by GUPC.

Local press reminded that just one week ago, Sacyr company presented a report that dealt with a balance of 2012 and first nine months of 2013 accounts and it did not mention the existence of any problem.