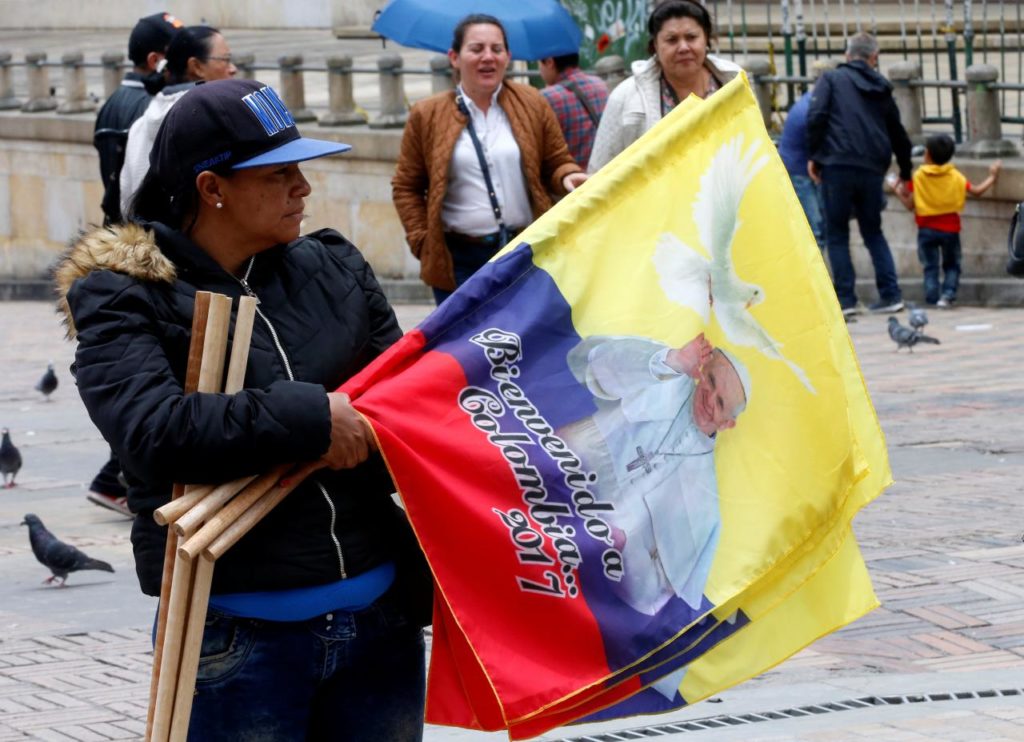 VATICAN CITY (Reuters) – Pope Francis travels to Colombia this week to encourage a fledgling peace process that ended half a century of war between a succession of governments and the guerrilla group FARC but has left the country deeply divided.

Francis, making his 20th foreign trip as pontiff and his fifth to his native Latin America, will spend five days in the country, visiting the capital Bogota and the cities of Villavicencio, Medellin and Cartagena.

The Argentine pope had delayed accepting a government and Church invitation to visit Colombia, where about 80 percent of the population is Catholic, until a viable peace process was under way.

“He had wanted to go for a long time. Now the moment has come,” Vatican spokesman Greg Burke said.

Leftist FARC, by far Colombia’s biggest rebel group, introduced its new political party last week, a major step in its transition into a civilian organization after more than 50 years of war that killed 220,000 people.

Under its 2016 peace deal with the government, most FARC fighters were granted amnesty and allowed to participate in politics. Whether the rebels will secure support from Colombians, many of who revile them, remains to be seen.

The peace accord, which was brokered by Cuba and Norway, was initially rejected by a less than 1 percent margin in a referendum before being modified and enacted.

Like the rest of the country, Colombia’s Roman Catholic bishops were divided on their support of the deal, with some saying it was too lenient to the guerrillas. The pope is expected to urge them to put aside their differences during his trip on Sept. 6-10 and help the country move forward.

“The greatest task of the Church in Colombia now is to help stem the polarization around the peace process between the government and the guerrillas,” said Archbishop Octavio Ruiz, a Vatican official and Colombian.

”This is a time for us to accept the grandeur of forgiveness, to leave behind us this dark period of war and blood.
RECONSTRUCTION, RECONCILIATION

Hosffman Ospino, a Colombian who is professor of pastoral theology and religious education at Boston College’s School of Theology and Ministry, said the country was ready to begin a new phase.

“The bishops of Colombia need to play a new role in the peace process so as to help create a political conscience,” he told Reuters. “I think the pope needs to encourage the Church to be an active player in those conversations, in the reconstruction of the social order.”

Reconciliation is the main theme of the trip and will be the emphasis for events on Friday in the city of Villavicencio, south of Bogota.

There, in what is billed as the “Great Prayer Meeting for National Reconciliation”, the pope will listen to testimonials from people whose lives were affected by the violence and then deliver a homily.

Burke, the Vatican spokesman, said those attending the prayer meeting would include victims of violence as well as former guerrillas who have been integrated into Colombian society for some time and are not part of the recent peace process with FARC.

He said there would be no formal meeting with opposition politicians, FARC, or the National Liberation Army (ELN), the second-largest insurgent group, which began formal peace negotiations in February after more than three years of secret talks.

The Marxist-led ELN, which was founded by radical Roman Catholic priests in 1964, has said it could declare a unilateral ceasefire during the trip to honor Pope Francis, whom they have praised for bringing attention to the world’s poor and disenfranchised.

The trip will have inter-related themes each day. “Builders of Peace, Promotes of Life,” in Bogota, “Reconciliation with God, among Colombians and with Nature” Villavicencio, “The Christian Vocation and Apostolate” in Medellin, and “The Dignity of People and Human Rights” in Cartagena.

- Advertisement -
Paying the bills
Previous articleSmall Plane With Five On Board Crashes In Pavas
Next articleTwo Dead, Four Others In Hospital After Plane Crashes In Pavas