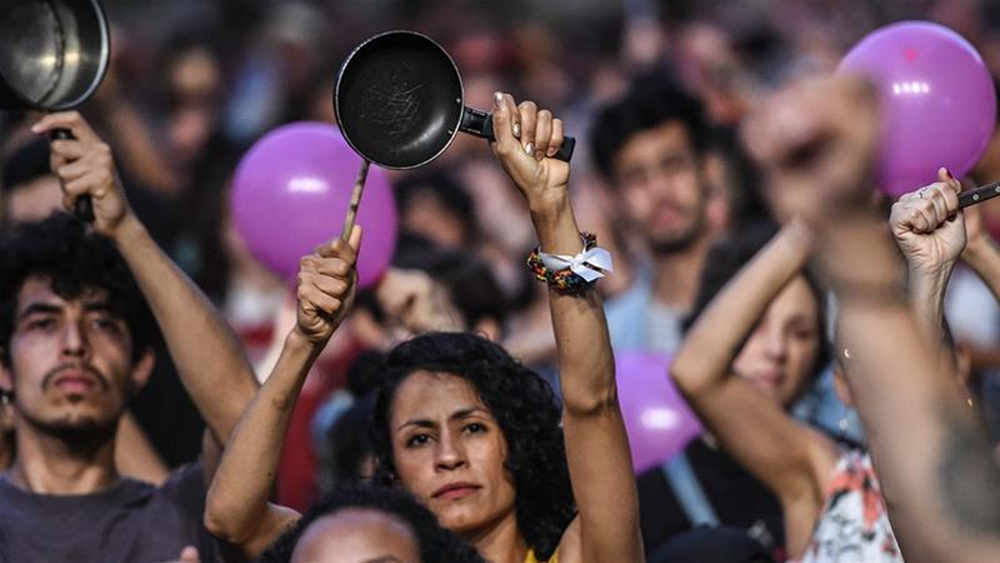 Medellin, Colombia – When 6 pm struck in Colombia, the sound of banging pots and pans – the “cacerolazo” – echoed across the country like they have since the mass anti-government protest kicked off more than a week ago.

But on Sunday, the thousands of Colombians gathered on the streets of the country’s biggest cities were not alone.

Colombia joined at least nine other countries in the region in what was dubbed a “Latin American Cacerolazo”.

The united demonstration comes after a wave of anti-government protests swept across Latin America, against everything from endemic economic inequality to violence against indigenous populations.

In Colombia, this most recent “cacerolazo” seemed to take on another significance as well, as leaders work to keep protest momentum going amid strained talks with the government of President Ivan Duque.

“It’s symbolic of that general dissatisfaction with the status quo,” said Sergio Guzman, director of Colombia Risk Analysis. “With politicians, with the way governments interpret popular will, with the way that communities are not taken into account on major decisions that affect them, with inequality.”

Ana Maria Grajales was among thousands of protesters in Colombia and banged a tin can with a dented spoon from her kitchen in the center of Medellin, the country’s second-biggest city. The 27-year-old university student said the regional outcry was a sign that “we Latinos are tired of being walked all over.”

“It’s been a long time with the same story, of everything just continuing to be the same, with the same politicians,” Grajales said. “Now, young people like us don’t have any opportunities.”

Protests had stretched on for 11 days in Colombia, spurred on by a variety of issues including rumoured economic reforms, killings of indigenous and social leaders, corruption and the country’s flailing peace accords. In Chile, protesters have been out on the streets for nearly two months, rallying against inequality and the government crackdown on protesters. In Argentina, protests have taken place in recent months over the country’s economic crisis. Protests have also recently occurred in Mexico, Ecuador, Peru and Bolivia, among other countries.

‘Not just an instrument’

The “cacerolazo” protest tradition dates back to centuries. It first began in medieval times when villages would use charivari, or “rough music”, noisy parades to shame men who married young women.

Since, it’s been adopted by French revolutionaries, Algerian paramilitaries, and in recent decades, by a swath of Latin American countries.

“It’s not just an instrument, it’s not just the noises it makes,” said Grajales, tapping the bottom of her can. “It’s why we’re doing it. It’s to tell them – the president and leaders – that things are bad and that we’re not going to stand for it any more.”

In Colombia, Sunday’s turnout was smaller than the mass-marches that had defined the South American country the week before, but thousands gathered in Medellin, Bogota and other cities across the country.

It’s not just an instrument, it’s not just the noises it makes. It’s why we’re doing it. It’s to tell them – the president and leaders – that things are bad and that we’re not going to stand for it any more.

Colombian analysts say the protest was about keeping the momentum as negotiations between protest leaders and Duque have hit a snag. Although Duque has offered minor concessions like including provisions for poorer Colombians in a recent tax bill and calling for a “national conversation”, negotiations proposed largely on the government’s own terms, it has done little but frustrate protesters who say the government still hasn’t heard them. The enduring marches acted as key leverage for protest organizers in their demands.

Kitchenware clanged in a steady rhythm as chanters yelled out “Down with Duque” in Medellin and the controversy-riddled ex-president Alvaro Uribe a “terrorist”.

Giovanni Romana, a 39-year-old social leader gathered among throngs of protesters in Medellin, said that Duque’s response has only further pushed him to continue protesting.

“Up until this moment, Ivan Duque has been practically mocking us Colombians,” Romana said. “He’s working against our people, against what we’ve built over so much time. He hasn’t really responded to us, it seems like he’s just mocking us. And what’s the response? This many people in the streets.”

That simmering discontent left Guzman and other experts predicting the civil unrest would only continue in the coming year.

And for Romana, the regional cacerolazo did not just represent the continuance of the protests, but the unifying of Latin Americans against a “common enemy” – systems of government that don’t work for their people.

“This is going to continue,” Romana said, “until he shows us that he’s willing to work with us.”

President Duque: “Colombia to reduce greenhouse gas emissions by 51% by 2030”

QCOLOMBIA – President Iván Duque, during his participation on Monday in...
Read more