Puntarenas Looking Towards A Mega-port and International Airport 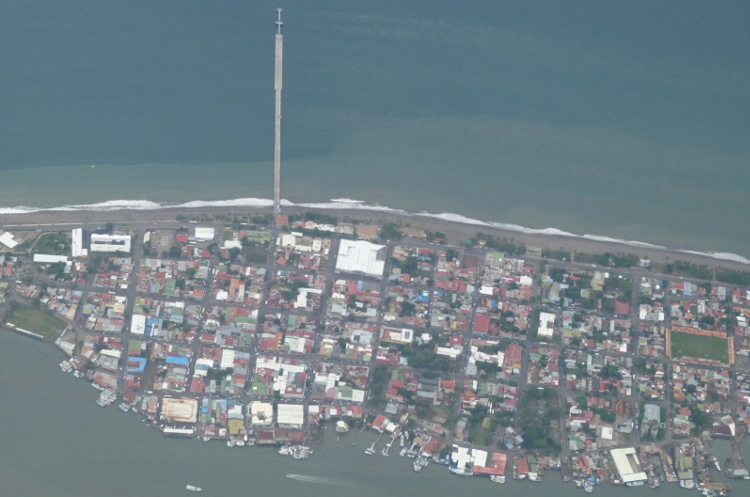 By Henry Morales, VozdeGuanacaste – The new Urban Littoral Zone Law is stirring up the aspirations of people in Puntarenas and Guanacaste. For some, having a mega port and a modern international airport in Puntarenas is a dream come true, not only for the investment it could bring to cities, but also for the creation of jobs and growth for the tourist industry.

But for others, the project would mean the collapse of the traditional fishing industry.

Despite opposition, in the municipality of Puntarenas, the project seems to be close to becoming reality. At least that is how one of the canton’s syndics, Evangelina Zuñiga, sees it. She indicated that there is already a municipal agreement guaranteeing the project, called “smart cities.”

During an ordinary session of the Municipality of Puntarenas, it was read that, “Considering the petition made by Mr. Mauricio Dobles Montealegre, regarding the initiative called, ‘Pacific Palmar Smart Cities Board,’ made on December 3, 2013, regarding the creation of a mega port terminal on the Pacific and an international airport [by] 2025, so that it becomes a national project, for the benefit of the communities of Puntarenas, Costa Rica and the Central American region. Therefore, it is an honor and a duty to vehemently request the support of the Palmar Pacific Board, the development company, builders, investors and companies from Singapore. Given the above, a special commission will be named to follow up with the project and inform this municipality regarding advances.”

According to Evangelina Zuñiga, the project is already moving forward and it is possible that Mauricio Dobles Montealegre and representatives from companies and the government of Singapore will return to meet with the municipality to speed up the project, as the idea is to formalize it in 2014.

Crisanta Rojas, a Chomes syndic, the Puntarenas municipality is motivated by the project. “When they presented the project I said… it’s a dream… because of how many people would have work. I believe it would be the best thing to happen to Puntarenas.” Rojas said that there is no need to fear progress. “Everything has its pros and cons, but how will we develop, if we don’t try to?”

But for the Nicoyan lawyer and promoter of the Coastal Community Territories Bill (TECOCOS), Wilmar Matarrita, this kind of initiative would only bring more poverty to residents of coastal areas. Matarrita denies that the project will produce more employment, and is sure that the manual labor will come from Singapore. In addition, he is certain that traditional fishermen would disappear.

Article by Vozdeguanacaste.com reprinted with permission

- Advertisement -
Paying the bills
Previous articleEarly Morning Quake Registered 4.4
Next articleI Am Concerned That I Won’t Pass the “Psychological” Testing To Keep My Dogs