Ruta 27 To Be Closed During Heavy Downpours

The preventive closure would be from Escazu to Calera

To avoid the dangers of flooding and falling rocks, in the event of heavy downpours, the Ruts 27 will be closed, the road concessionaire, Global Via and the National Concessions Council (CNC), announced.

Last Saturday, as reported in the social media by drivers caught in the thick of things, the Ruta 27 was flooded in several areas, in one section the rock wall became a waterfall.

Silvia Jimenez, the technical secretary for the CNC, explained that closures will be applied between Escazu and Caldera and drivers will be informed through the information boards along the highway.

The official warned drivers to take extra care during heavy downpours. September and October are the heaviest months of the rainy season.

Globalvia blamed Saturday’s flooding to an obstruction of the gutters or cunetas in Spanish n the right of way of the railway. Although not always noticeable, the seldom-used San Jose – Puntarenas rail line runs parallel through most of the Ruta 27.

For their part, the Laboratorio Nacional de Materiales y Modelos Estructurales (Lanamme) – the National Laboratory of Materials and Structural Models of the Universidad de Costa Rica (UCR) has been warning about the dangers of the road. In June 2016, when it concluded that several slopes are eroded and landslides may occur if the faults are not corrected in a timely manner.

Another risk noted by the inspection is the drainage for acids, ie water with high levels of acidity that goes down the slopes and produces detachment of the concrete coatings installed by the concessionaire. Lanamme criticized the CNC for minimizing these defects and, sometimes, responds to the warnings as if they didn’t exist.

In another report, earlier this month, Lanamme revealed that the problems of exudation on the roadway has increased, causes braking problems for vehicles.

As explained by Lanamme experts, skidding hazards increases by water on the surface of the pavement, polished aggregates or excess asphalt or other lubricants on the pavement surface.

Maintaining a pavement which allows water to flow off is a basic consideration. Polished Aggregate and Exudation are two common problems, the former is were aggregates are susceptible to wearing to a smooth finish or texture under traffic; the latter, sweating or exudation of oil from the asphalt, is where a pavement surface can become flushed with asphalt and lose its skid resistance, causing braking problems and increases the risk of skidding. This deterioration is caused by poor quality asphalt.

The La Nacion published an infographic detailed the problem. 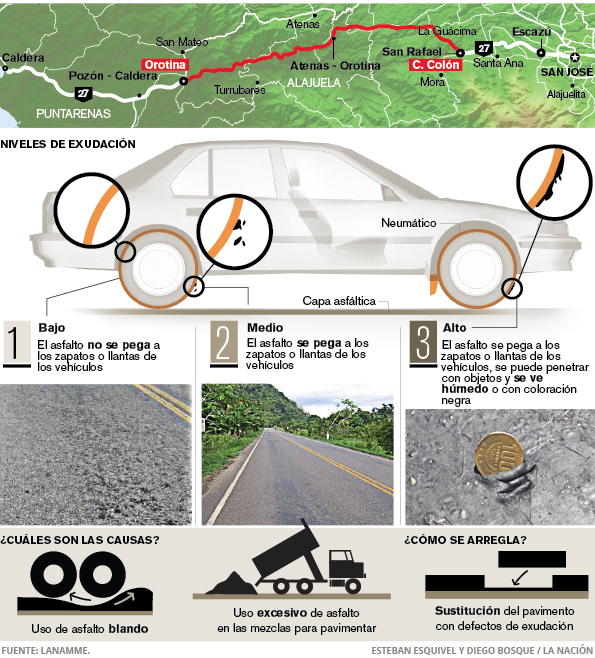 QCOSTARICA - Is there something worse than having a...
Front Page