Six Pack Of Imperial Costs Less In The U.S. Than in Costa Rica 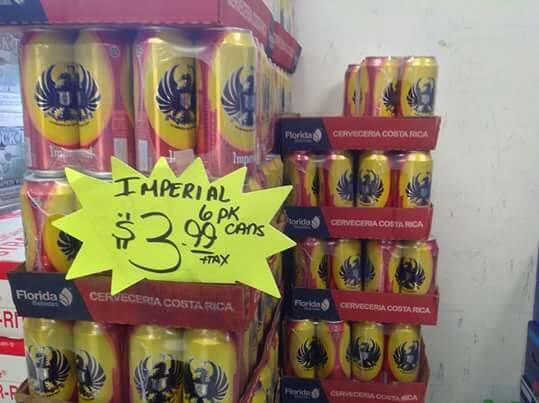 QHUMOUR – Looking for beers for the weekend? Better skip the local markets and head for the U.S. for good prices on Costa Rica made beers.

The photo of a six pack of “Imperial” talls in the United States for US$3.99 has gone viral on the social media.

To be fair, the beer sold in Costa Rica includes the tax, in the U.S. it does not.

One commentator on the social media suggested the high prices in Costa Rica is to reduce drunk driving in the country, making the beer expensive means less drinking by. “Imagine if they were cheap,” says the commentator.

In Costa Rica, We Say “Birra”

The Latin American Spanish word for beer is cerveza. But in...
Read more

A favorite at any time, but especially in the town of...
Read more

QCOSTARICA - Costa Rica already reports variants of SARS-CoV-2, the virus that causes covid-19 that emerged in the United Kingdom and South Africa and...
Political Economy

QCOSTARICA - Spain had excluded Costa Rica from the list of risk countries to enter by air for presenting a negative covid-19 test (RT-PCR,...
Business

QCOSTARICA - The elimination of the daytime sanitary vehicle restrictions in less than a week, given the drop in infections and hospitalizations due to...
Employment

Japan is beefing up measures against loneliness, taking a first major step toward comprehensively tackling a pervasive problem in the nation that has again...
HQ