The Good Doctor Is Back, Doing An About Face On His Resignation 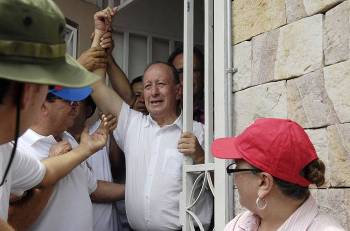 Dr. Rodolfo Hernández in an about face, on Saturday announced that he is back in the drivers seat at the Partido Unidad Social Cristiana (PUSC) bid for the presidential chair.

y, the good doctor, alleging betrayal, envy, egotism and backstabbing, announced his resignation as PUSC presidential candidate, leaving the party with only two weeks to nominate a new candidate or sit out the 2014 elections.

Dr. Hernández, said he is “a man who cannot not help themselves to the most vulnerable”.

“This boat will reach safe harbour”, said Dr.Hernández on Saturday from his hoome in Sabanilla Montes de Oca (San Pedro).

Critics see the Hernández as a farse, one day quitting and then, less than 48 hours later, back again.

Former presidential candidate and founder the Partido Accion Cuidanda (PAC), said, “the doctor left the hospital, but the PUSC is still in intensive care”.

Partido Liberación Nacional (PLN) candidate, Johnny Araya, said “I don’t think the Costa Rican people can have trust with so much uncertainty”.

Otto Guevata, candidate for the Partido Movimiento Libertario, asserted that “a very firm person, a person who runs away and then comes back.”

Dr. Hernández told the hundreds gathered outside his home that he would take a couple of days off and be back on the campaign trail on Tuesday.