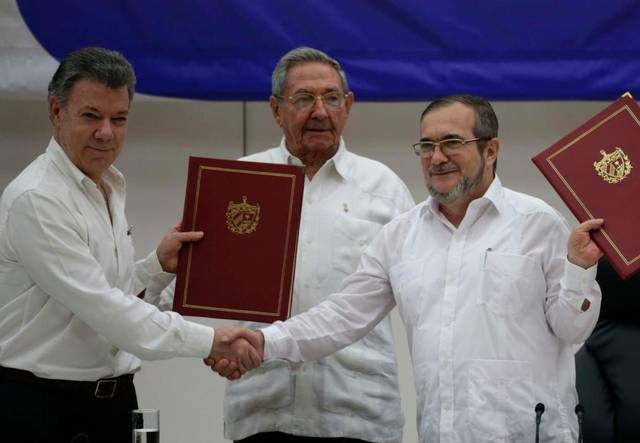 TODAY COLOMBIA – The Colombian government and rebels of the FARC laid out their plans for a definitive ceasefire and concentration of guerrilla fighters in an historic event in Havana, Cuba.

But nothing goes into effect until the final peace agreement is signed, and there is still no plan to address the criminal earnings that sustain the rebel movement.

While closing in on a peace deal is of seismic importance for Colombia after half a century of civil conflict, the mission of InSight Crime is to determine the deal’s effects on the dynamics of organized crime, particularly the billion-dollar criminal economies that reside in FARC areas of influence.

Here, amid the 35 pages of the newly signed agreement, there are some mentions of this criminal booty, made up largely of income from the drug trade, extortion and illegal mining. The FARC dominate Colombia’s coca-growing regions and have secured control over gold producing areas in more than nine departments of the country.

On the territorial front, the FARC and the government have agreed to 23 concentration zones for rebel fighters: “Zonas Veredales Transitorias de Normalización,” which roughly translates as “Transitory Hamlet Zones for Normalization.” There will be eight FARC camps, where weapons will be stored, rebels housed and which are closed to the public. The size and location of these zones has not yet been made public, but the word “hamlet” in the title indicates they are not going to be huge, like the 42,000-square km safe haven granted to the FARC during the 1999-2002 negotiations.

The location of these zones could play a big part in future criminal dynamics, given the significant risk of recycling of the criminal economies of the FARC. InSight Crime has spent the last year visiting key FARC municipalities which generate much of the rebels’ earnings. We have identified more than 90 of the country’s 1,100-odd municipalities as having a high risk of recycled criminal economies, and therefore violence.

These are municipalities under FARC domination, which generate significant earnings from illegal activities and are therefore of interest to other illegal actors. If these municipalities have a concentration zone nearby, it may help reduce the risk of other groups recycling the criminal economies present. The state, working with the FARC, might be able to undermine these criminal economies and bring these often neglected parts of the country into the national mainstream. If the state does nothing, these economies may be passed to the FARC’s rebel cousins of the National Liberation Army (Ejército de Nacional Liberación – ELN), FARC elements may go into business for themselves or other criminal groups may “invade” the territory.

The inability or unwillingness of the state to occupy territory in 2006, after the demobilization of the right wing paramilitary army of the United Self-Defense Forces of Colombia (Autodefensas Unidas de Colombia – AUC) led to the birth of a new generation of criminal groups called the BACRIM (from the Spanish “bandas criminales”). The fear is that if the state again fails to fill the vacuum, other criminal structures will simply move in to the space left by the FARC.

One of the principal criminal beneficiaries of the FARC withdrawing from the conflict and strategic territory across the country may be the neo-paramilitary BACRIM. These groups are already positioning themselves to take over chunks of FARC territory. We have tracked new BACRIM activity, expansion and clashes in Antioquia, Chocó, Guaviare, Meta, Norte de Santander Putumayo and Santander.

The agreement addresses this risk in its item 3.4:

“Agreement on security guarantees and the fight against criminal organizations responsible for killings and massacres or that threaten defenders of human rights, social or political movements, including the criminal organizations that have been designated as successors of paramilitarism and their support networks, and prosecution of criminal behavior that threaten the implementation of agreements and peace building.”

The state is setting up a National Commission of Guarantees for Security (Comisión Nacional de Garantías de Seguridad) which will formulate policies to dismantle any organizations that threaten the peace deal. That effort will include an elite police body with a “multidimensional focus.” Its members “will be selected under a special model that certifies high standards of suitability, transparency and effectiveness.”

The truth is that a body like this already exists and is called the Search Bloc. It is currently deployed against the BACRIM, although it has yet to find any of the top leadership of the most powerful criminal syndicate in Colombia, the Urabeños. It is not clear whether another unit will be set up or whether the existing Search Bloc will be renamed or incorporated into a new effort.

Also important is the issue of FARC weapons, of which there may be as many as 45,000. If they enter the black market it could provide organized crime with an arms bonanza. The guerrillas have promised to deliver all the weapons they possess, those in the hands of their militiamen as well as the uniformed fighters, to the United Nations. Three separate deliveries are planned, and all weapons should be handed over 180 days after the signature of a final peace agreement. They are to be turned into three monuments, with one residing in Colombia, another in Cuba — which hosted peace talks — and the final one at the United Nations.

The fact that the militiamen were mentioned apart suggests that they will not be going into the concentration zones. In criminal terms, these networks are important as in many cases they help manage the finances of the rebels, the collection of extortion payments, money laundering, as well as the collection of “taxes” on the drug trade. If they remain in place, the risk of criminalization of these elements, who continue to collect money but now keep it for themselves, is high in many parts of the country.

While FARC uniformed guerrillas number up to 8000, according to government figures, the rebel movement includes as many as 10,000 militiamen and 30,000 collaborators. In the last ten years the importance of the FARC militia has increased as the number of their uniformed fighters, or “guerrilleros rasos,” has fallen. The militiamen have become one of the principal offensive weapons in the FARC arsenal, placing bombs, sowing land mines and assassinating members of the security forces. They have also become to the key to dominating territory and the criminal economies within it. If they remain outside the agreement and in control of the criminal economies, the chances of them staying in business and perhaps forming “FARCRIM” is high in certain parts of the country.

When a final peace agreement is signed in Havana, hopefully on July 20 as the president has promised, the FARC will make the transition from a rebel army funded by illegality to a political force. However, the signatures will not do away with up a billion dollars in illegal earnings that currently sustain the FARC. They will also be unwillingly to let go of that money until they are sure that the peace deal will be honored and they will be allowed to participate in the political system.

The future of these criminal economies will determine the next chapter in Colombia’s criminal history.