Looking for some travel inspiration? Costa Rica should be top of your list. The small Central American country is home to stunning beaches, volcanoes, and diverse wildlife. Jungle makes up roughly one-quarter of the country.

Worried about the environmental impact of traveling abroad? Costa Rica could help ease your guilt, the country is extremely environmentally-friendly.

Still concerned? Offset your carbon footprint and eat vegan food on your journey.

Where to Eat Vegan Food in Costa Rica

Kenney’s new restaurant Casa Planta—set to open in early 2020—will use plant-based, farm-to-table ingredients. The celebrity chef—who owns a string of vegan restaurants and businesses around the world—will oversee all aspects of food preparation in the restaurant. Kenney said in a statement, “Costa Rica is abundant with fresh aromatic fruits and vegetables year-round, and aligns perfectly with my roots and values.“ 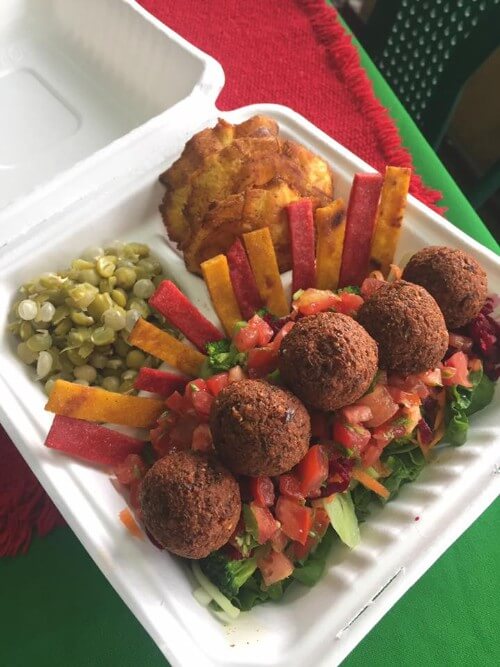 Costa Rica has fresh fruit in abundance. It’s known for its vibrant and tasty tropical offerings, like maracuyá (passion fruit) or carambola (star fruit). There’s also Costa Rican guava, pineapples, and plantain. Farmers markets and stands across the country sell a variety of these fruits—which are often freshly picked—for extremely affordable prices. If you’re heading out on a trip, stop by a farmers market first with a reusable shopping bag and stock up on juicy snacks for the journey.

Que Rico Lo Bueno in San Pedro is all about serving natural vegan food. According to veggie travel site Happy Cow, its bacon is made with chickpeas, it also offers tomato chorizo and almond-based cheese. Every Saturday, the vegan restaurant opens a stall at Feria Verde. The event aims to promote the “long-term health, sustainability, and care of our food systems and communities in Costa Rica,” says the food fair’s website.

LuvBurger has several locations across Costa Rica, in Nosara, Playa Samara, and San José. The fast-casual chain specializes in vegan burgers, and aims to “create a bridge” between “fast unhealthy food” and “fast healthy food.” Its menu includes the Coco Bacon burger, which is topped with coconut bacon and cashew cream cheese, and the Tropical burger, which is topped with grilled pineapple.

Huaca Mole Sodita has two locations, one in San Pedro and one in San José. According to Happy Cow, it uses fresh ingredients, like plantain and avocado, in a number of its dishes. It serves a variety of options, including vegan sandwiches, tacos, pizzas, burgers, and pasta dishes. On Facebook, reviewers say the chain offers “exquisite food” and “stopping to eat here is an excellent decision.”

Want to observe and support local wildlife? Here are four destinations to consider.

If you end up staying at the IGLOO Beach Lodge Hotel, you’ll be in the perfect spot to explore Manuel Antonio National Park. The area is renowned for its beauty and biodiversity; it’s home a wide range of tropical plants and endangered wildlife, including white-faced capuchin monkeys. There are a wide variety of tours on offer in the park, including the Manuel Antonio Park Guided Tour. For $51, a guide will take you on a hike through the park’s rainforest trails for around three hours. Along the way, you will have a chance to spot animals like titi monkeys and poison dart frogs in their natural habitat.

Territorio De Zaguates is a dog sanctuary in the mountains of Santa Barbara de Heredia, home to around 1300 stray dogs. Founded eight years ago by Lya Battle and Alvaro Saumet, the sanctuary offers the country’s stray dogs a safe haven. The animals receive veterinary care, healthy food, and a whole lot of love. To find out more about the sanctuary’s work, tourists can see it on the Netflix documentary “Dogs.”

The sanctuary relies on visitors, sponsorships, and donations in order to continue its valuable work. It has been closed to the public for around a year due to infrastructure renovations. However, it hopes to open again soon in 2020, so stay tuned.

Puerta de Jade B&B is situated near the Poas Volcano, an active volcano—which has erupted 40 times since 1828, most recently in 2017—in Poas National Park. The park is home to hiking trails with panoramic views. It’s one of the easiest spots to view the cloud forest that surrounds Costa Rica’s capital city of San José.

Puerta de Jade—a small, quiet B&B with only four bedrooms—serves purely vegetarian and vegan food for breakfast, dinner, and lunch. It’s ideal for nature lovers, says Vegan Travel, thanks to its large garden. The website says, “you wake up with bird songs and feel the fresh air at 1700 meters altitude, with the Poas volcano view.”

Alturas Wildlife Sanctuary is dedicated to conserving and protecting Costa Rica’s wildlife. The non-profit organization—located in Provincia de Puntarenas—helps to rescue, rehabilitate, and release sick, injured, and orphaned animals. For the animals that it can’t release back into the wild, Alturas Wildlife Sanctuary provides a longterm home. It offers them a safe and comfortable environment to live out the rest of their lives in.

The sanctuary relies on donations and volunteers to survive and is also funded by its daily tours of the sanctuary.

Article was first published at Livekindly.co. Read the original here.

In Costa Rica, 15% of consumers show interest in seafood, and...
Read more

4 Dream Destinations if you are a Vegetarian Traveler

Sometimes when I would tell my friends about my plan of...
Read more

QCOSTARICA - Six months after the start of vaccination against covid-19, will it be time to open the campaign to those who want to...
Tourism

QCOSTARICA - This Sunday, the Guanacaste Airport - a member of the VINCI Airports network - received the first of the daily flights from...
Environment