(Q24N) The people entrusted with enforcing the law in Venezuela regularly make the headlines as suspects or alleged accomplices, facilitators or perpetrators of serious crimes, a sign of the advanced deterioration and corruption of the country’s security forces. 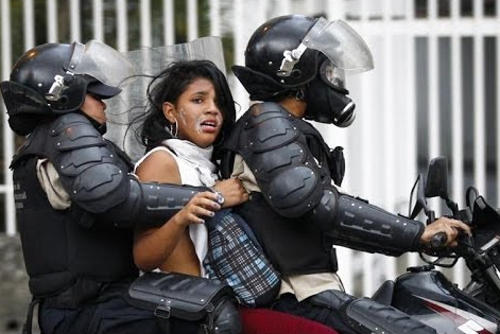 Corrupt officials — especially police and military — play an essential role in the penetration and growth of organized crime in Venezuela, which is reflected in alarming crime statistics.

The cases have ranged from officers of the Bolivarian Armed Forces accused of transporting drug shipments in military vehicles, facilitating the passage of drug planes or managing gasoline smuggling to Colombia. Even the recently named interior minister has been accused by the United States of facilitating drug shipments when he was head of the country’s anti-narcotics effort, a charge he denies.

Police officers have been known to allow prisoners to escape, or to support or participate in kidnapping and extortion rings. There have been cases of security force members providing weapons and information to criminal groups and even procuring grenades for prison mafias.

As Latinobarometro has noted, police corruption is one of the principal problems in Latin America, and public perception of its extent is a big issue for regional law enforcement. The belief that police are corrupt in Latin America runs from 90 percent in Mexico to 47 percent in Uruguay, and 70 percent of people polled in Venezuela have a negative view of their authorities. In addition, 56 percent of Venezuelan respondents say they believe the police are involved in organized crime.

In 2009, Interior Minister Tarek El Aissami said that 20 percent of crimes in Venezuela are committed by police officers and, despite a lack of statistics, general perception is that those numbers have since increased. That perception has been fed by cases like the January 2015 arrest of 11 judicial police officers who were holding a local merchant for ransom in their police station.

Publicity surrounding that case led to a “restructuring” of the detective corps and the creation of a presidential commission tasked with developing a new model for the police, the third reform effort since 2006. The commission submitted a report that included a series of legislative bills on police reform. However, the legal project was never debated, much less voted on, despite the governing party’s majority in congress. The two previous reform efforts — in 2006 and 2012 — met with similar fates.

Venezuela’s Bolivarian National Guard (Guardia Nacional Boliviariana – GNB) has long been tainted by corruption. The responsibilities of this fourth branch of the Venezuelan Armed Forces include border surveillance, ports, airports, oil facilities, parks and maintaining public order. In recent years, officers of the GNB — as well as member of all the nation’s defense and security agencies — have been implicated in drug trafficking, kidnappings and other illegal practices.

Testimonials of mid-level GNB officers who spoke on condition of anonymity indicate that officers pay their superiors for assignments in the “most profitable” areas of the country, as determined by potential for collecting bribes. The bribe money is divided according to rank, with operational troops in the field getting 30 percent, intermediate officers getting 20 percent and commanders raking in 50 percent.

These “commissions,” as they are called, are collected for allowing contraband gasoline shipments through to Colombia, allowing cocaine to be placed on an aircraft or turning off a radar to let a suspicious flight go by undetected.

Members of the Bolivarian National Police have said that some officers pay their superiors to be assigned to area’s where merchants sell basic goods on the black market. These areas are prime jurisdictions for collecting bribes.

Similarly, criminal detainees, defense lawyers and even public prosecutors know the “rates” charged by detectives to alter police records or “mistakenly” change one digit of a suspect’s ID number, which can indefinitely delay a case. They also know the “cost” of removing evidence or “misplacing” an entire case file.

The director of security for the state of Guárico was replaced in November 2015 after he was accused of passing information to Venezuela’s most wanted criminal, gang leader José Tovar Colina, alias “El Picure.” Police finally caught up with Tovar and killed him in May 2016.

The occasional dismissal of officers caught in the act of corruption, however, is not enough to restore public confidence in the police forces. Only profound changes in the functioning and efficiency of the Venezuelan police can do that.

The Venezuelan media reports on a daily basis cases of military officials who are suspected or are alleged accomplices, facilitators or perpetrators of serious crimes. The jobs performed by police officers puts them in more direct contact with criminals than any other sector of society. As a result, they constantly are exposed to temptation or are targeted by attempts to corrupt them.

Both informal and institutional regulation of police forces is essential in any democracy. But in Venezuela, the controls that existed have been systematically dismantled, facilitating the strengthening of organized crime.

In an effective system of police hierarchy, higher ranking officers are expected to play a significant role in controlling the conduct of their subordinates. In the Venezuelan police forces, advancement through the ranks is based on loyalty and political sympathy rather than training, experience or merit.

Most police forces have an internal affairs office in change of investigating improper or illegal activity carried out by members of the police. While Venezuela’s National Police Board has mandated such offices in all police agencies, that mandate has not be carried out in practice. The lack of effective internal controls was highlighted by the reform commission appointed by President Nicolás Maduro in 2014, which called on the creation of a national internal affairs office. As noted, that reform effort was shelved.

Venezuelan law provides for a degree of citizen participation in regulation of the police, via the Citizens Police Control Committees (Comités Ciudadanos de Control Policial – CCCP), community councils and any other legitimate community-based organization. But polarization of Venezuelan politics at all levels — and majority control of the governing party at the community level — has made citizen control of police functions ineffective. Government control of a high-level and little-known General Police Council, whose members are appointed by the interior minister, limits its effectiveness and independence.

Although the National Assembly has a legal mandate to perform a watchdog function with regard to other government institutions, it has failed to do so. Despite a series of disturbing developments in recent years involving increased crime and violence, weapons being smuggled into prisons and reports of serious human rights abuses, the National Assembly failed to hold any enquiries or call on any senior officials to testify in hearings between 2005 and 2015.

The Attorney General of the Republic

No unit dedicated to investigating police corruption or crimes committed by officials exists in the Attorney General’s Office. The proceedings against military or police officers are assigned according to the nature of the charges to the different departments of public prosecutor’s office: Drugs; Anti-Corruption; Anti Extortion and Kidnapping; Defense of Women; Protection of Fundamental Rights; etc. The attorney general reported that in 2015, 1,312 officials from different security forces were suspected of wrongdoing and 959 of them were formally charged with committing crimes. The report did not specify what crimes they were charged with, making it impossible to establish how many are related to police corruption.

The majority of the National Assembly from 2005 to December 2015, which had little understanding that the Ombudsman exists to limit the abuses of the authorities, appears to have decided that it should appoint someone who is prepared to protect the state, regardless of its actions. In December 2014, the National Assembly appointed Tarek William Saab, a recognized leader of the ruling United Socialist Party of Venezuela (Partido Socialista Unido de Venezuela – PSUV) and deputy governor of Anzoátegui. Tarek Saab has taken a much more active approach than his predecessors. He nonetheless finds himself in the difficult position of trying to restore the dignity of the office while also remaining a politician.

In an ideal context, non-governmental organizations (NGOs) should receive support from their governments to help carry out their activities. In a “normal” context, NGOs should be allowed to carry out their activities with freedom and respect. In Venezuela, however, the context has been hostile, slowing the ability of NGOs to act, as the authorities refuse to accept their reports, recommendations or complaints. In some cases, the authorities have even targeted the leaders of NGOs. This has prevented them from fulfilling their role as a watchdog of police corruption, among other things.

The press is an essential element in the fight against police corruption, as it is in many ways the eyes and ears of society. Unfortunately, the attitude of the Venezuelan government toward media reports has been similar to its attitude toward NGOs.

The police situation in Venezuela is complex, especially when analyzed in the context of the social, economic, political, and public safety crises facing the country. Police agents and their families suffer equally from shortages of food and basic goods, as well as from the permanent threat of being killed by criminals looking to steal their weapon or even items like their bicycle.

In short, Venezuela’s police forces are not subject to any kind of control, be it formal or informal, internal or external. They have awful labor conditions, work in high-risk environments, and the few punishments handed down to corrupt officers fail to improve the situation of a country in crisis. It should not be surprising then, however troubling it may be, that police corruption in Venezuela continues to grow.

Q24N - The alliance of Germany's BioTech, which developed the vaccine...
Read more

QCOSTARICA - The Regulatory Authority of Public Services (Aresep) announced this Wednesday that it plans to introduce prepaid electricity applicable to the residential sector. With...
Read more
HQ

Woman charged clients ¢35,000 for having sex with young women

QCOSTARICA - A man named García, a resident of Osa, in the southern zone, underwent a penis amputation on Wednesday in an attempt to...
Dollar Exchange

QCOSTARICA - After peaking on November 11, at ¢616.58 according to the Banco Central (Central Bank) average, the exchange rate seems to be losing...
Health

QCOSTARICA - Although this year the traditional lighting of the Museo de los Niños (Children's Museum), which year after year attracted thousands of families...
Puntarenas

QCOSTARICA - With the homicide of a 61-year-old man this Sunday, in Puntarenas, the province reaches 77 murders, the highest number in the last...