The confirmed cases with covid-19 in Costa Rica in the last two months reached 765 this Thursday, May 7. This is an increase of four cases compared to Wednesday. 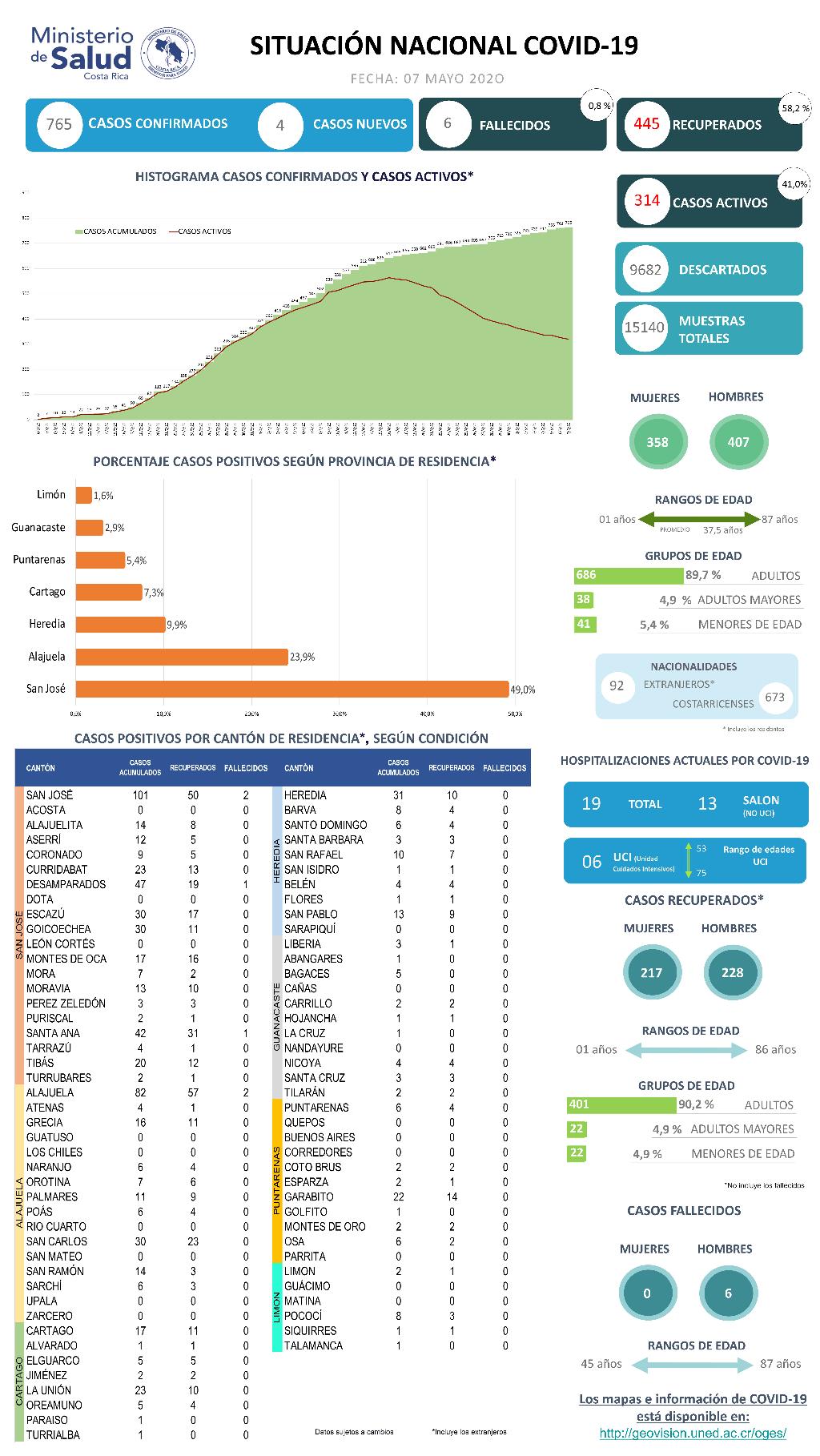 The positive cases are already reported 64 of the 82 cantons of the country. The latest to make the list is Talamanca, in Limón, with one positive in Sixaola, the border district with Panama.

Health Minister Daniel Salas confirmed they are following up on all the contacts in the last 14 days.

The minister also noted that of 230 tests carried out on cross border transport carriers (Panama and Nicaragua), only one was confirmed with covid-19. “He has already been identified, we have him in isolation and we are tracking contacts and identifying cases and issuing health orders,” he said.

Every time a case reaches a canton, more may be reported, Salas said. However, Talamanca has an advantage: it is a canton with low population density.

As of this Thursday, 19 patients with covid-19 are hospitalized: six of them in the Intensive Care Unit (ICU) with an age range of 53 to 75.

During the restriction period, only Costa Ricans and residents (who have not left the country on March 24 and after) will be allowed entry. All foreigners non-residents and tourists are prohibited entry. See the full details here.

In addition, Soto said all foreigner transport carriers, as a requirement of entry, must undergo mandatory covid-19 testing.

Drugs to fight the virus

Minister Salas confirmed Thursday that, in the case of Costa Rica, hydroxychloroquine, a drug used for decades to treat malaria, is being prescribed to patients and that Chinese scientists also administered it to patients in that country. As in the Asian country, here it has given good results, especially to counteract the advance of the virus in those affected.

In the United States, the FDA endorsed using remdisivir.

In this sense, the Institute of Pharmaceutical Research of the University of Costa Rica offered to create a treatment based on remdesivir. Salas said he is open to use it.

“We are fully available to have more appropriate treatments based on scientific evidence to address patients with covid-19 when all safety requirements are met.”

He clarified that the Pharmaceutical Research Institute does not currently have the drugstore registry, which would be the one that accredits it to import the supplies to produce the medicine, and it does not have the operating health permit to produce intravenous drugs.

QCOSTARICA - The Ministry of Health and the Costa Rican Tourism...
Read more

QCOSTARICA - The Costa Rican cinemas chain CCM launched a platform to offer its virtual billboard. The tool, available only in Costa Rica, will offer...
Trends

Andrey Amador Bikkazakova is the first Costa Rican to compete in the Tour de France as a professional road bicycle racer. Andrey rode with...
Cartago

QCOSTARICA - Fog, light rain and very cold it was for those who had to leave home this morning in Cartago, due to the...
Rico's Covid-19 Digest

QCOSTARICA - The fifth batch of the Pfizer/Biontech vaccine arrived in Costa Rica Tuesday night, January 19. The 16,575 doses landed at 9 pm on...
HQ

"Collisions with fixed objects are also traffic accidents," says a reminder from the Ministery of Transport (MOPT). Although some might believe that it is not,...
HQ

QCOSTAIRCA - An American woman drowned this Wednesday afternoon in Playa Negra in Puerto Viejo, in Talamanca de Limón. The Red Cross indicated that the...
Honduras

QCOSTARICA - Health authorities said on Thursday they will maintain the vaccination against COVID-19 of vulnerable groups despite the notification from Pfizer it would...