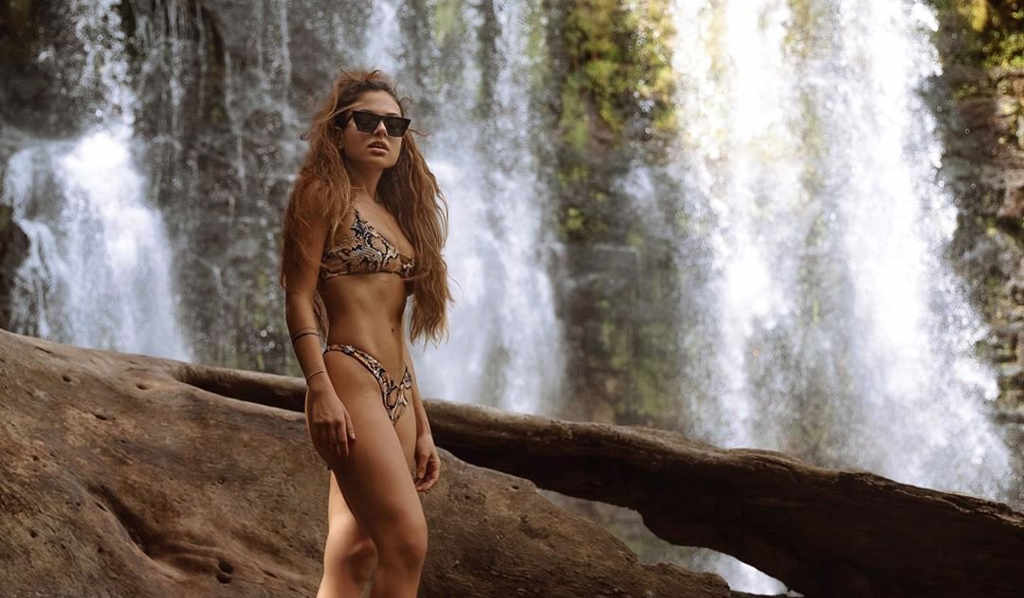 Inanna Sarkis showed off her incredible bikini body during a getaway in Costa Rica, and her fans went absolutely wild over the stunning snapshot of her stylish swimwear.

On Friday, Inanna took to Instagram to share a photo of her tiny two-piece swimsuit with her 10.2 million followers. The 26-year-old After actress was pictured flaunting her fit figure in a snakeskin-print bikini with a realistic scaled pattern in tan, brown, and black. The print resembled the skin of a Burmese python.

Inanna’s top featured a low scoop neck and cut-outs in the center of the bust that put her cleavage on full display. However, the sides of the garment were thick, and they offered far more coverage than a skimpy string bikini.

Inanna’s bottoms featured a wide V-cut front and thick side straps. The leg openings were high-cut, creating the illusion that Inanna’s lean legs were even longer than they naturally are. The design of her bikini also showcased her long, toned torso. She was posing slightly to the side, which revealed that her stomach was almost perfectly flat.

Inanna accessorized her swimsuit with a pair of black sunglasses with squared-off frames. The svelte social media sensation was wearing her thick, toffee-colored tresses pulled partially back from her face. Her waist-length hair tumbled over her shoulders in untamed waves.

Inanna was standing on what appeared to be a giant piece of wood from a massive fallen tree. A gorgeous waterfall was visible in the background behind her.

In the caption of her post, the popular YouTuber revealed that her photo was snapped in Costa Rica, and she quipped that exploring the rainforests of the Central American country has turned her into “Tarzan’s daughter.”

Costa Rica has turned me into Tarzan’s daughter ???? (@kampollock)

It took Inanna’s bikini photo just one day to earn more than 440,000 likes. The comments section was also inundated with hundreds of comments from the Canadian star’s numerous admirers. A few of them agreed that her photo looked like a scene from a Tarzan movie.

“The hell I literally saw this and was like ‘she looks straight outta Tarzan damn’ then I see your caption,” wrote Inanna’s Seance costar Madisen Beaty.

“You just get hotter and hotter!! Insane!!! I love this!! Giving me Jane of the jungle vibes!!” remarked another fan.

Inanna has shared quite a few bikini photos with her Instagram followers lately, including the above snaps from her recent trip to Nicaragua. As previously reported by The Inquisitr, she and her boyfriend, Let It Snow star Matthew Noszka, were also pictured together in a poolside photo.

What do you prefer, accommodation-wise, when you go on vacation? Do you...
Read more