Nicaragua Planning Launch Of 2 Satellites By 2017

TODAY NICARAGUA (EFE) Nicaragua said it planned to have two telecommunications satellites in orbit by 2017 thanks to a project being carried out by satellite manufacturer China Great Wall Industries Corp., or GCWIC.

“The Nicasat (project is made up of) two satellites. They’re (scheduled to be launched in) 2017,” Telemaco Talavera, an adviser to the Nicaraguan government and president of the National Council of Universities, told reporters. 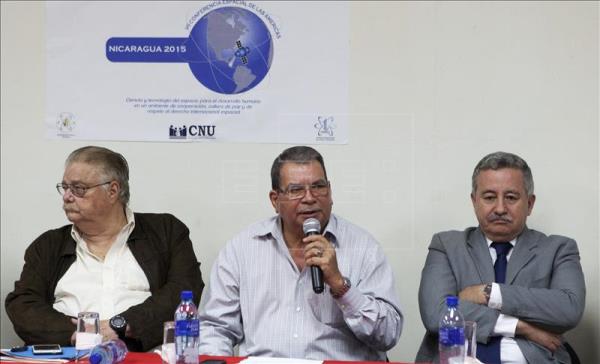 The Nicaraguan government said in 2013 that the Nicasat-1 satellite would be built – with US$346 million in financing from Chinese banks – by GCWIC, a unit of China Aerospace Science and Technology Corp., the Asian nation’s top space industry contractor.

Talavera did not provide details on the second satellite nor its construction and launch timeframe, although he said both were being built and that the technicians who would operate them were currently undergoing training.

Nicaragua expects the satellites will “not only improve telecommunications, but also access to data that will enable improvement in educational aspects and (the areas of) science, technology, the environment, illness, crops, diagnoses and climate change,” the official said.

He gave no reason for the one-year delay in the launch of Nicasat-1, which was originally to have been put into orbit in the third quarter of 2016.

The satellites will be used to provide cellular telephony, television and data services and eventually also provide coverage to other countries in Central America, authorities say.

No Central American nation currently has its own satellite in orbit. EFE